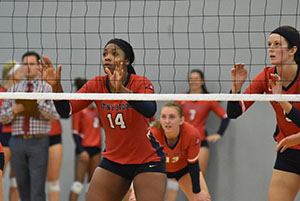 The Stony Brook volleyball team made it five straight victories as it battled to a five-set win at St. John’s Tuesday night. After dropping the first set the Seawolves bounced back to claim the next two and rallied through a fifth set that saw nine ties and five lead changes tocome out on top. Stony Brook moves to 9-6 on the season, while St. John’s falls to 8-7.

Belzung’s Reaction
“Our team played very scrappy tonight and brought consistent energy from the very first points,” said head coach Kristin Belzung. “Cydney Bowman had a night where everything was clicking and the defense found a way to out-grit a very good offensive team in St. John’s.”

Set-By-Set
– Stony Brook got out to an early lead in the opening set, but St. John’s eventually took the advantage. The Seawolves did not back down and senior Cydney Bowman (Lake Mary, Fla.) threw down back-to-back kills to make it 24-21 in the Red Storm’s favor. St. John’s immediately called a timeout and was able to tack on the point after the break to take the first set, 25-21.
– Close play started the second set as the Seawolves were able to keep the difference within a point for much of the opening scoring. The Seawolves scored three straight points to take their first lead of the set and force St. John’s to call a timeout. Junior McKyla Brooks (Blasdell, N.Y.) and sophomore LeAnne Sakowicz (Wauconda, Ill.) got up for a block to tie the set at 21-all. Bowman eventually closed it out with a kill to seal the 25-23 win.
– After back-and-forth scoring started the third set, the Seawolves began to pull away. It was Bowman again that threw down a kill to give Stony Brook a 25-17 win.
– St. John’s was not ready to back down in the fourth set and jumped out to a 9-1 lead to start. Stony Brook responded and was able to get back within three points late in the set, but the Red Storm forced a fifth with a 25-20 win.
– Stony Brook started the fifth set taking a 6-2 lead, but St. John’s rallied back to even things up at seven-all. Neither team led by more than two points the rest of the way, while seeing eight more ties and four lead changes. Sophomore Jordan Gels (Lewis Center, Ohio) had two big kills down the stretch to help the Seawolves earn the win with a 19-17 victory.
— Bowman had a big day, matching her career high with 16 kills in the match.
— Gels also threw down 16 kills in the win, reaching double-figures in the category for the fourth time in five matches.
— Sakowicz tallied 54 assists in the match, surpassing the 50-mark for the first time in her career.

Up Next
After the quick turnaround, the Seawolves will have time to rest before diving into conference play. They host Hartford on Friday, Sept. 29 at 6:30 p.m.