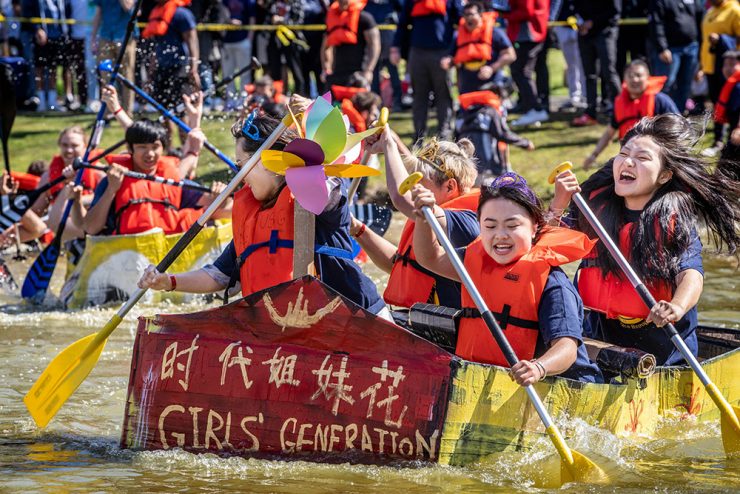 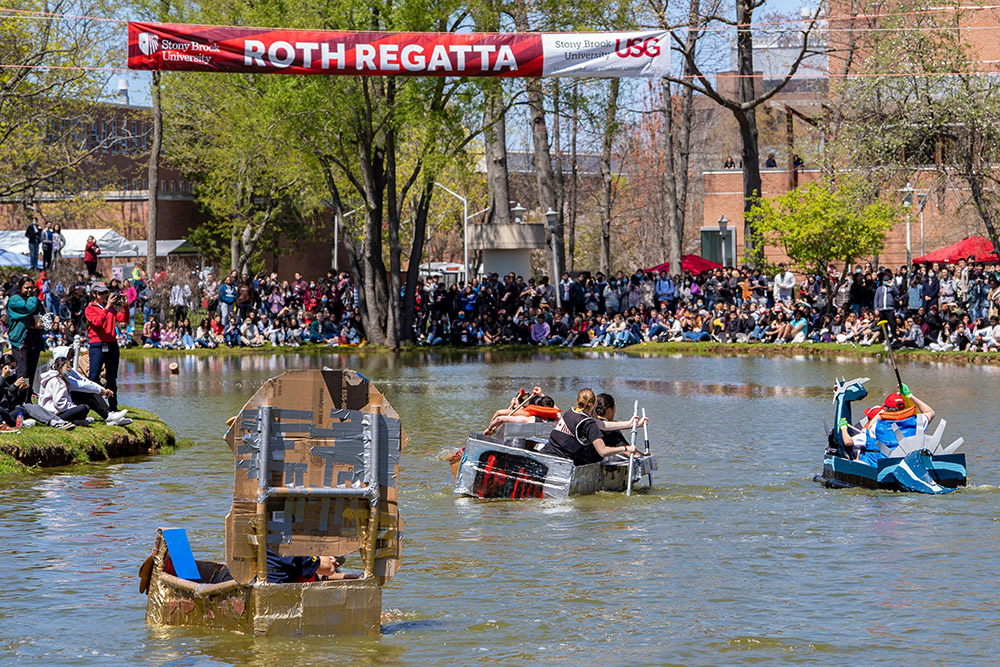 Nearly 60 makeshift boats created from equal parts cardboard, duct tape, inspiration and perspiration took to the waters of Roth Pond for the long-anticipated running of the 33rd annual Roth Regatta on April 29.

Sailing under the theme of “Time Travel,” boats representing everything from Noah’s Ark to the Titanic to multiple Magic School Buses traversed the 200-yard pond surrounded by hundreds of students and members of the Stony Brook University community. Sunny skies and a cool breeze provided optimal sea conditions for the various clubs, organizations and friends who competed in the Speedster (two-person) and Yacht (four-person) divisions.

The regatta, a beloved and uniquely Stony Brook campus tradition presented by the Undergraduate Student Government, was held in person for the first time since 2019, and the celebratory vibe was evident from the start. President Maurie McInnis, Dean of Students Ric McClendon and Vice President of Student Affairs Rick Gatteau kicked things off by sounding the opening horn and wishing all the teams good luck. The regatta featured music, food and prizes along with the intense competition on the pond, and was live-streamed on YouTube and Facebook by the School of Communication and Journalism and the Stony Brook Media Group.

Regatta regulations limit the boat materials to only cardboard, duct tape, spray paint and string — no wood, plastic tubing, water bottles, or water-resistant paint are allowed, and other than the initial push-off, paddles are the sole source of propulsion. Which meant the teams needed to be creative as well as strategic in order to succeed, with most spending multiple days constructing their boats after weeks (and sometimes months) of planning.

Fifteen initial heats took off from the shore. Heat winners then quickly made repairs and adjustments before the semifinal and final rounds.

When all was said and done, the purple Jazzy James, representing James Hall with Wolfie emblazoned on its sail, won the Speedster finals, while the Chinese Students and Scholars Association (CSSA). which had been runners-up in the past, took the title in the Yacht division.

And if anyone doubted that brains counted just as much as muscle to power the boats across the finish line first, a member of the James team said the key to winning was simple: “Lots of math.”