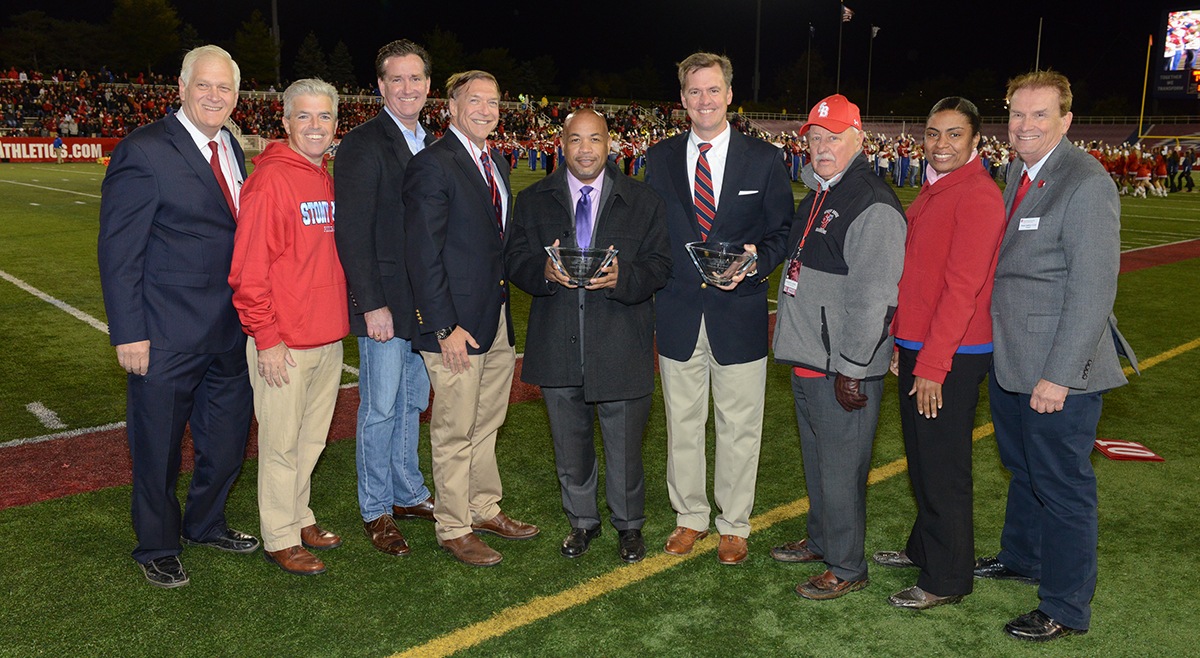 “Speaker Heastie and Charles Ryan exemplify Stony Brook’s finest,” said President Samuel L. Stanley Jr. “We are so proud of their career achievements and gratified by their support of their alma mater.”

Elected to office in 2000, Heastie became New York’s first African American Assembly Speaker in February 2015. As a representative of the 83rd District in the Bronx, Heastie was the prime sponsor of the Wage Theft Prevention Act, which enacted harsher penalties for employers that steal wages from employees. Most recently, he served as the chairman of the Assembly Labor Committee. Prior to joining the state Assembly, Heastie was a budget analyst in the New York City Comptroller’s office, using skills he honed while earning his BS in applied Mathematics and Statistics from Stony Brook and his MBA in Finance from Baruch College.

“It is an honor and a privilege to receive the Distinguished Alumni Award,” Heastie said. “The lessons I learned at Stony Brook have carried me through the halls of the New York State Assembly. I am grateful to the University and its alumni for being a constant source of support. I made lifelong friends here and I am so proud to be a Seawolf.”

Many at Stony Brook remember him fondly and remain proud of his accomplishments. “He is an example that most things are possible when a person of color receives a good education, walks through doors that are barely open and insists on sitting at the head of the table,” said Frances Brisbane, PhD, a Vice President in the Office of Faculty, Staff and Student Diversity. “I applaud Stony Brook University for honoring him as a Distinguished Alumni.”

Dr. Ryan earned his PhD in Oral Biology and Pathology from Stony Brook and has extensive background in the pharmaceutical and biotechnology industries. He is Vice President and General Counsel at Cold Spring Harbor Laboratory, a preeminent molecular biology and genetics research institution in Cold Spring Harbor, NY, where 60 Stony Brook students are currently doing research. In the 12 years prior, he was a Senior Vice President and Chief Intellectual Property Counsel for Forest Laboratories, Inc. Ryan received his undergraduate degree from The College of Wooster and his JD from Western New England University.

During the Stony Brook University Homecoming game halftime ceremony, Ryan said that he was honored to be recognized as a distinguished alumnus from Stony Brook.

“One of the things that attracted me to Stony Brook was the ability to obtain a world-class education at a reasonable cost,” said Ryan. “It also offers a culturally rich and diverse community. I was educated alongside a number of driven, highly capable people who challenged and motivated me.”

While at Stony Brook, Ryan met his wife, Dr. Maria Emanuel Ryan, who received her PhD and DDS at Stony Brook and is currently Chairman of the Department of Oral Biology and Pathology, a position his one-time mentor, SUNY Distinguished Professor, Dr. Israel Kleinberg once held.

“When I first interviewed Charles Ryan, I immediately recognized his winning characteristics,” Kleinberg said. “As things turned out, I was absolutely right. He proved to be conscientious, thorough, very bright, and good common sense. He was always courteous and innovative and I am proud to have had the opportunity to mentor him.”

Said Alumni Association President Robert Stafford ’72, ’82: “We are proud to recognize Speaker Carl Heastie and Dr. Charles Ryan for their successful careers and community achievements, extraordinary commitment to Stony Brook and for reflecting the highest values embraced and promoted by the University and the Stony Brook Alumni Association.”

Click here to view photos of the Distinguished Alumni Awards presentation and recipients.