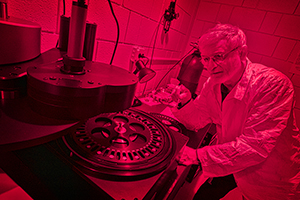 The shape of Long Island is instantly recognizable to its nearly 8 million inhabitants, from the New York City boroughs of Brooklyn and Queens to the North and South Forks of Suffolk County. Twenty thousand years ago, however, what we know today as Long Island would have been unrecognizable to modern eyes.

The prehistoric Long Island’s shoreline was hundreds of miles further out, with the landmass that we know today buried under a continental glacier. That glacier dumped tons of sand, rock, and other sediment into the region over thousands of years, until melting water began to outpace ice renewal. As the glacier retreated, forming the North Fork and Long Island Sound, huge amounts of water entered the earth’s oceans. The rising seas encroached on Long Island’s shoreline, finally giving it the shape we know today.

While the processes that formed Long Island as we know it today happened over millennia, in geologic terms, they happened yesterday. Now, a new lab at Stony Brook University will help us understand how it happened, and what it might mean for the future.

Thanks to the generosity of an anonymous donor, Stony Brook University’s Department of Geosciences has established a Laboratory for the Analysis and Dating of Sediments (LADS). A $350,000 gift will enable Stony Brook faculty and students to study the geologically young and highly dynamic environment of Long Island and the coastal northeast.

“LADS will help provide a better understanding of how Long Island was formed by glaciers and sediments associated with them and how it responds to climate change,” said Dan M. Davis, professor and, chair of the Department of Geosciences.

Using a new tool called Optically Stimulated Luminescence (OSL), which can determine when sediments were last exposed to sunlight, LADS will allow Stony Brook faculty and students researchers to date specific subsurface layers of Long Island. The information gained through this process will provide new insight into geological and environmental questions that would otherwise be impossible to answer.

“We have techniques that can image these layers,” Davis said, “but what we’ve been missing that this laboratory will provide is the ability to put samples of those layers into a time context.”

A specific layer of subsurface, for instance, can now be dated and reveal that its age correlates well with the growth and shifting of Fire Island. Other samples, near the surface, could tell researchers that it was affected by events like Hurricane Sandy. And others, deeper down still, could tell researchers about the timing and conditions surrounding the melting of a continental glacier.

“Visible light from the sun can cause electrons in a grain of sand to become trapped at certain energy levels,” Davis said. “When that grain of sand or dirt is buried, those traps decay away with time. As long as you can correct for other energy sources, you can collect a sample — out of direct sunlight of course — analyze it via OSL and tell how long ago it saw daylight.”

Geology students and faculty at Stony Brook aren’t the only ones who will benefit from LADS, either. Because the timeframe that OSL is dating is not many millions of years — such as isotope or uranium-led dating — the technology LADS supplies has a high potential for cross-discipline impact, aiding in research dealing with geology, environmental science and archeology. That means powerful research opportunities in Stony Brook’s backyard for students across the University.

“I can’t think of a better opportunity for a young geoscientist than to partner with a renowned faculty researcher who’s uncovering the history behind the formation of Long Island,” said Dexter A. Bailey Jr., senior vice president for University Advancement. “This is yet another example of how philanthropy makes up the margin of excellence at Stony Brook University and the kind of global impact potential donors can have on scientific discovery.”

The gift to support the Laboratory for the Analysis and Dating of Sediments also counts toward The Campaign for Stony Brook, a $600 million fundraising effort and the largest in SUNY history. To date, more than 44,400 people have donated over $564 million. Make a gift today in support of your interests and help Stony Brook affect powerful change on Long Island and around the world. What are you passionate about? Give today.