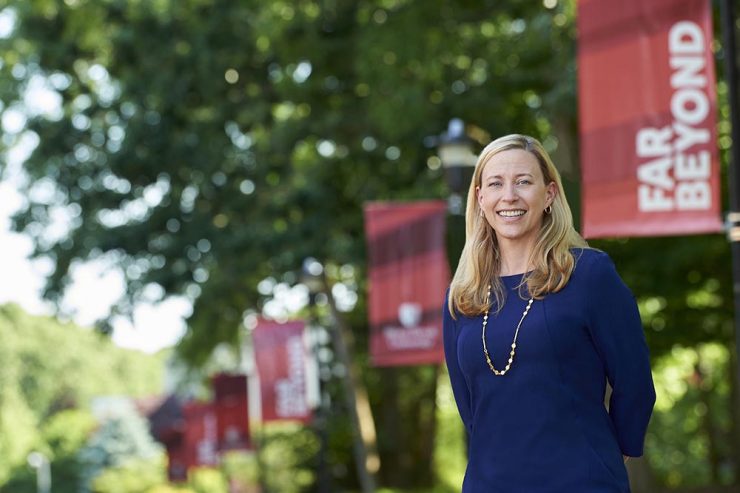 International students spent an insightful and personal hour with Stony Brook University President Maurie McInnis on July 20 during a special webinar titled “A Conversation with President McInnis.” The event, McInnis’ first formal opportunity to communicate directly with international students since officially taking the helm on July 1, covered a wide range of topics, both personal and professional.

Seventy-five people participated in the Zoom webinar, which was moderated by Jun Liu, vice president/vice provost for Global Affairs and dean of International Academic Programs and Services, and featured questions asked by a diverse panel of international students.

After brief opening remarks, the questions began, the first one asking about McInnis’ educational background and her experience as an art historian as it related to being a university president.

“It doesn’t matter what field you come from, you can be a great university president with any background,” said McInnis, who went on to describe the unique value of having a humanistic background.

“I think there’s great value in a field where you learn how to analyze and think critically, and you learn how to communicate effectively and go back and forth on ideas,” she said. However, there was no plan as far as her own career path was concerned.

Another student asked what inspired McInnis’ dedication to studying Black history. She described growing up in the U.S. South about a decade after the passage of the Civil Rights Act in 1964 and talked about experiences that would influence her future interest in Black history.

“When I was in grade school, it wasn’t that long after schools were integrated,” she said, “but I can tell you that the history I was taught as a child was from an entirely white perspective.”

She described taking courses in college that challenged the white dominant narrative, revealing a much fuller and more complex history of the United States of America.

“As I moved into my PhD studies, I felt there was a history that had not yet been told,” she said. “I’m really a cultural historian. I don’t write about aesthetic and stylistic movements; I write about how people lived and how their histories and cultures shaped and changed those worlds. I had an opportunity to add something to the work that historians were doing to talk about the history of slavery.”

McInnis also described her career at the University of Virginia (UVA) — her alma mater and an institution that has struggled to rectify a past tied to slavery and gender segregation. She would return to UVA after earning a PhD in History of Art at Yale, serving almost two decades in various academic and administrative roles, including three years as the university’s vice provost for academic affairs. In that role, she worked with students to research and tell a more complete history of the institution.

“That was an important piece of acknowledging a really difficult past, and it laid the groundwork for beginning to have conversations of what an inclusive future might look like,” she said. “That is work that has been really important to me, as is the contribution I can make as an historian to help uncover and talk about histories that have long been hidden away.”

“This is important work that Stony Brook has been working on for years, and there is so much more work to be done,” she said. “We need to figure out how to work together as a community to bring meaningful change. I really believe we are at a moment in U.S. history where there are significantly different conversations going on. That gives me hope that we’re not just talking, but really coming together for the kind of meaningful change that builds more inclusive communities. But there is much work to do and our students are a huge piece of the movement towards equity and inclusion. We need to hear your voices.”

Attendees also had an opportunity to ask questions, and one asked McInnis to describe what she considers the best parts of her career.

“I’ve always loved the connection that I’ve had with my students over the years,” she said. “There are many students that I taught — long, long ago — with whom I’m still in touch.  What I really value most about my work in higher education and academic leadership is knowing that the institutions I’ve been involved with have been able to make a positive difference in the world.”

McInnis mentioned the great impact of the research, scholarship and creative arts that Stony Brook faculty are involved with and ended the conversation exactly where it started — the importance of the humanities and positive human interaction.

“Higher education is an amazing place where people come together from all over the world,” she said. “We learn from one another, we expand our world-views and our knowledge, and we go out and make a difference in the world. That’s a really great thing to be a part of.”