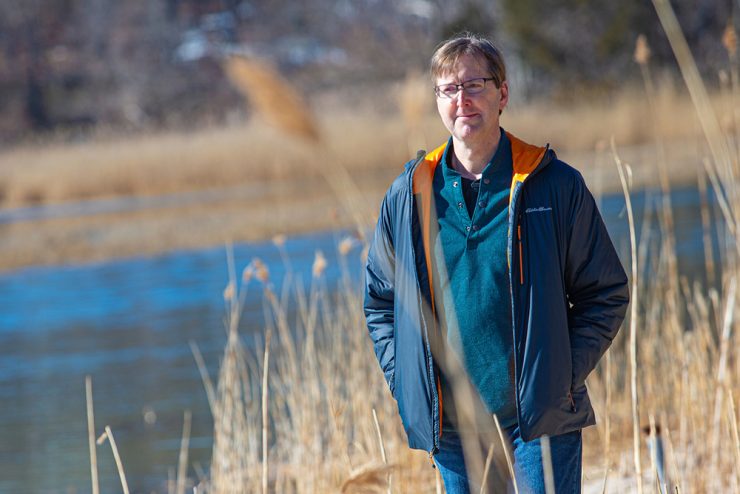 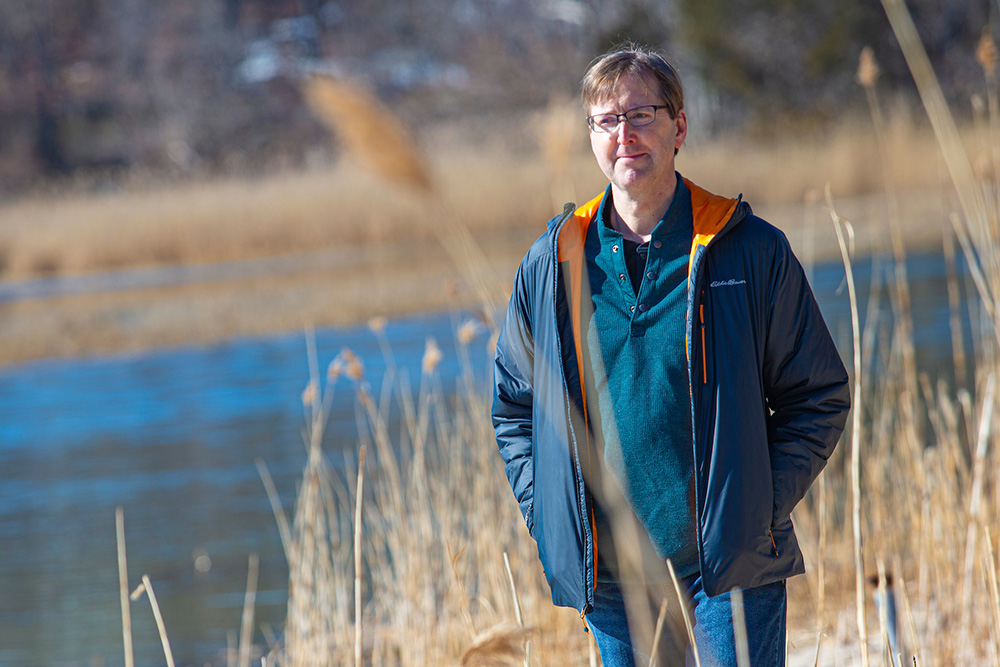 Professor Inspires Lab Team by Tapping Into His Past

Carlos Simmerling, PhD, was one of those kids with a chemistry kit in his basement and tolerant parents who didn’t mind the resulting smoke. When it came time for college, he didn’t hesitate to major in chemistry. However, that was an experiment that at first went awry.

“I wanted to be a chemist. When I took organic chemistry, it was the first time that I really thought about it being three-dimensional, and that was really exciting to me,” said Simmerling, a Marsha Laufer Endowed Professor of Physical and Quantitative Biology and associate director of the Laufer Center at Stony Brook University. “But then I took the lab and hated the solvents, the spills. I decided if this was the life of a chemist, it wasn’t for me.”

He quit college and entered the workforce for eight years, becoming a computer store manager. Though Simmerling was doing well, it became clear to further his career he needed a college degree. He decided the quickest path was going back to study chemistry but at that point, he was more interested in computers.

His past experiences melded when he realized the overlap of his interest in computers, visualization and chemistry. “I did still love chemistry. It’s just that I wanted to do something more computational,” he said.

It was his doctoral advisor at the University of Illinois at Chicago who showed him how, encouraging Simmerling to perform early research on methods for computer modeling of biomolecules such as proteins. He went on to a postdoctoral fellowship at University of California, San Francisco, where he became a lead developer of the Amber biomolecular simulation software that is used in thousands of research labs worldwide. His current National Institutes of Health- and National Science Foundation-funded research focuses on development of improved simulation methods and models and using these tools to study biomolecular recognition mechanisms.

A Résumé of Mentoring Skills

When he joined SBU’s Department of Chemistry in 1998, he brought with him a passion for providing students with the guidance he had initially lacked and the belief that a lab can be like a family. The result is that while Simmerling is known for breakthrough research, he’s also recognized as a dedicated student mentor. He recently won the Gordon Bell Prize for developing a groundbreaking simulation of the COVID-19 virus, analyzing its infectious effect on host cells. But he didn’t do it alone; it was a collaborative approach with his undergraduate and graduate students — an unusual situation in most science research labs, though not for a professor whose students understand that he cares about them and their careers.

Lauren Raguette, a fourth-year, PhD chemistry student, said Simmerling creates a positive atmosphere for all his students and adapts his mentoring style to their individual needs. His interest in her career goals following graduation inspired her to become a chemistry professor.

“He knows that being a graduate student is a steppingstone to get where we want to be, so not only does he go about making these years great, he also makes sure that he’s setting us up for success no matter what we want to do next,” she said.

It’s All About Teamwork

Simmerling said his business experience helped him to recognize the skills required to run a lab and to mentor, like managing a team.

“Everything is about teamwork in science,” he said. “Your team involves people that are like you, but also people that don’t have your skill set. The best teams are the ones where people have complementary skills. Science these days is very interdisciplinary. Interfacing between fields can be the glue that holds projects together. Learning how to talk to biologists and physicists and how to speak both of the languages ends up being really important. That’s something I try to teach my students.”

Simmerling is also committed to diversity in his lab and actively recruits underrepresented groups into STEM. “I believe in going to them, not waiting for them to decide on their own about going to graduate school, because a lot of them don’t have the support network with inside knowledge. I tell them that a career in science is a valid option for them, that I support them and will guide them through the process.”

That’s why there are 10 female undergraduates currently working in his lab, he said. “I’m trying to keep the pipeline full and make sure they have someone on their side if things get difficult (and at some point they do, for all of us). It’s what I didn’t have when I was in college, and why I quit. A lot of really talented people need someone like me to encourage them, mentor them and believe in them, especially if they didn’t come from a family or schools that had the experience or resources to do it.”

Simmerling’s encouragement doesn’t stop with graduation; he still keeps in touch, said Agnes (He) Huang, PhD ’18, an application scientist at OpenEye Scientific Software. “He maintains a Simmerling Lab Alumni Google group where he shares job postings and news about Stony Brook. Even after we graduate, we feel a part of the Simmerling community. That’s something I really appreciate.”

It was in this community that the COVID project became a group decision. When the pandemic hit and students moved to remote learning, they wanted to feel they weren’t helpless. He said the team, which includes seven graduate students and 12 undergraduates, decided they had to find a way to fight back.

“This project has brought students together,” Simmerling said. “Lots of people work on overlapping and similar things in the group, but this is a huge one where your piece of the project wasn’t going to do anything without everybody else’s piece, and it really helped give us an even greater sense of teamwork and that’s what everybody needs now.”

Throughout the pandemic, he has kept in daily contact with his students, sending them a morning email to check in while he has his coffee, and on Fridays reminding them to step away from their work and do something fun.

“I need these connections as much as they do because the work, while exciting, is hard and can be very isolating during this time,” Simmerling said.

Ultimately, he said, he loves his job. “I think that was one of the things that I learned from my father was that he worked really hard, but he loved what he did. I feel like that’s success: having a job I care about and loving the outcome.”

Liza N. Burby is a freelance writer and features editor for Stony Brook University Magazine, as well as a journalism professor.