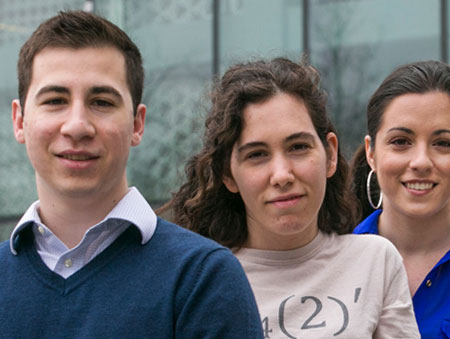 Three Stony Brook undergraduates were honored with prestigious 2016 Goldwater Scholarships and will receive grants to pursue research careers in science, mathematics and engineering.

Michael D’Agati ’18, Lea Kenigsberg ’17 and Ioana Soaita ’17 were nominated by the University and selected from a field of 1,150 applicants, representing 415 colleges and universities nationwide. The prestigious one- and two-year scholarships cover the cost of tuition, fees, books, and room and board up to $7,500 per year.

The Barry M. Goldwater Scholarship and Excellence in Education Program is charged with providing a continuous stream of highly qualified scientists, mathematicians and engineers. The multiple awards underscore Stony Brook’s record of achievement in the STEM fields.

This is the fourth time the University has netted three Goldwater Scholarships at one time since the Foundation began handing them out to deserving students in 1992. Stony Brook also tallied three Goldwater selections in 1997, 1998 and 2004. The maximum number of nominees a university is permitted at one time is four.

“Stony Brook’s students are constantly impressing us with their contributions to the public good and it is great to see these three students recognized at the national level for their excellence,” said Nancy Goroff, professor of chemistry and associate provost for Stony Brook’s Office for the Integration of Research, Education, and Professional Development (IREP).

As a sophomore, Michael D’Agati is in the minority of Goldwater Scholarship recipients.

“Typically only 20 percent of the recipients are sophomores. The rest are juniors,” said Jen Green, external fellowship advisor, Office for the Integration of Research, Education and Professional Development (IREP).

Michael, from Miller Place, New York, an electrical engineering major, was selected for his research involving nanotechnology for biomedical applications.

One of his mentors, Balaji Sitharaman, an assistant professor in the Department of Biomedical Engineering, labeled Michael’s research, “A very creative and cool project.”

Michael is developing an innovative medical monitoring device using a graphite-based supercapacitor that could be used to wirelessly communicate vital health parameters. Health data would be collected and monitored by tiny sensors implanted within the patient’s body.

“The entire embedded system would allow people without access to medical facilities to gain information about their bodies without having to physically step foot into a physician’s office,” Michael said.

Lea Kenigsberg, a mathematics major, is accustomed to overcoming tough challenges. She is an immigrant from Israel, for whom English is a second language, and a 28-year-old and a single mother.

She is particularly interested in theorems that lie at the intersection of certain subfields of mathematics such as algebra, analysis, topology and geometry.

“I was initially interested in studying mathematics because I found it difficult to study physics and chemistry without having a good command of math,” she said. “I wanted to make the ideas precise and it was only possible through mathematics. I found its elegance, simplicity and logical consistency very appealing, comforting even. It was only later, when I was introduced to ideas in differential topology and analysis, that I saw the creative and imaginative side of math and fell head over heels for it.”

One of her mentors, Professor Marco Martens, from the Department of Mathematics, said of Lea, “I am sure she will have a great career, but she will also be an articulate voice in explaining math and science to a broader public.”

Ioana Soaita is a biomedical engineering major from Danbury, Connecticut, whose research in the lab of David Rubenstein landed her the prestigious award. Ioana originally hails from Bucharest, Romania and arrived in the United States at the age of seven. She seeks to understand the link between diabetes and its most prevalent risk factor, cardiovascular disease.

“Diabetes is generally marked by prolonged high blood sugar levels, which can lead to various chemical reactions in the blood,” said Ioana. “We specifically focus on the formation of glycated albumin [a marker that helps physicians measure bood sugar levels], and how that affects platelet properties associated with cardiovascular diseases.“

Wei Yin Rubenstein, an assistant professor in the Department of Biomedical Engineering who also mentored Ioana, said, “I think what makes Ioana stand out is that she cares about what she is doing and wants to know more, and she believes that what she is working on in the lab could make a difference.”

Rubenstein, an associate professor in the Department of Biomedical Engineering, was a recipient of the Goldwater Scholarship when he attended Stony Brook in 2003 and has mentored many Goldwater candidates since.