Hummingbird Study Shows How Genetic Changes Could Be Predicted 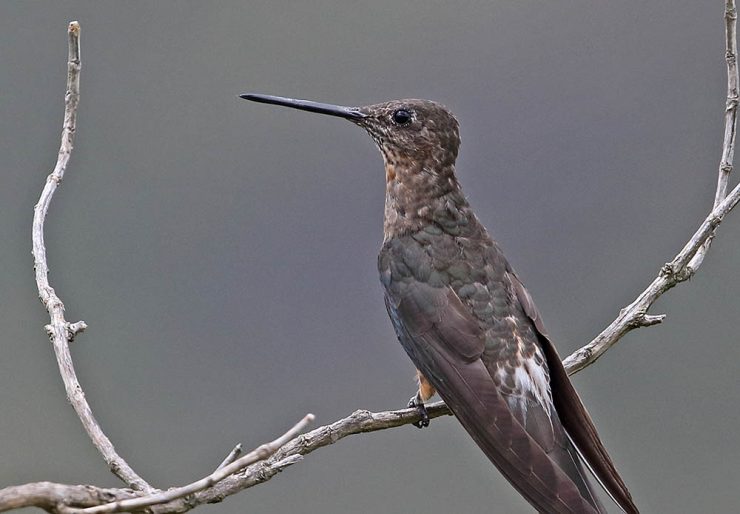 Multiple hummingbird species have adapted to high altitudes in the Andes Mountains through genetic mutations that affect the same biochemical pathways, a study by Stony Brook researchers finds.

Creatures that transition from low to high elevations must evolve because of extreme changes in temperature, oxygen and other factors. Genetic changes are necessary for species to evolve and adapt to new environments. However, how can one predict such genetic changes? A study led by Stony Brook University researchers reveals that this may be possible at a molecular level.

In a paper published in in Genome Biology and Evolution, researchers found that multiple hummingbird species – such as the giant hummingbird, Patogona gigas – have adapted to high altitudes in the Andes Mountains through genetic mutations that affect the same biochemical pathways.

Lead author Marisa Lim, PhD, a graduate of the doctoral program in the Department of Ecology & Evolution, summarizes that the study shows “there is a predictability in the evolutionary machinery, primarily across biological pathways.” The research team discovered this by sequencing thousands of genes of 12 hummingbird species in the Andes.

To complete this sequencing aspect of the research, co-author Liliana M. Dávalos, Professor of Ecology & Evolution and affiliate faculty member of Stony Brook University’s Institute for Advanced Computational Science (IACS), explains Dr. Lim conducted massive parallel computing on each gene to find out if genes had changed with the colonization of hummingbirds at high elevation habitats. The researchers used the high-speed computing capacities available at the IACS to accurately identify the genes and any changes.

They identified pathways, genes and amino acid sites that were shared across high or low elevation humming bird species. This finding may provide a basis for looking at biological pathway changes in other species to determine how they have evolved to geographic and climatic changes.

The research was supported, in part, by the National Science Foundation.