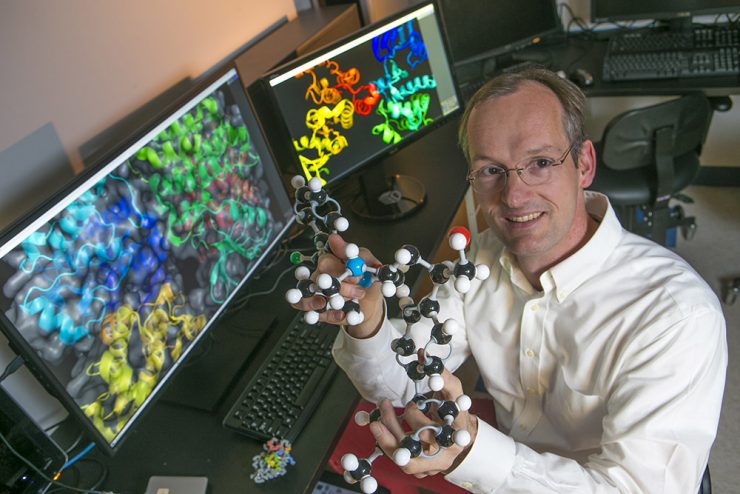 Stony Brook-led research proposes a new approach to classifying protein kinases  – a class of signaling molecules – that takes account of their potential as drug targets.

Protein kinases regulate most cellular processes. When they malfunction, diseases such as cancer can result. This is why certain types of protein kinases implicated in disease are desirable drug targets. A new study led by Markus Seeliger, PhD, Associate Professor of Pharmacological Sciences in the Renaissance School of Medicine at Stony Brook University, and published early online in Cell Chemical Biology, takes a fresh approach to grouping kinases as potential drug targets.

Much of the previous research with kinases involves grouping them based on how closely related they are to each other. This method, says Seeliger, somewhat resembles cataloging artworks alphabetically by artists and has had success – such as in the case of targeting a kinase to treat chronic myeloid leukemia.

However, the method also has drawbacks. Seeliger and colleagues in the Laufer Center at Stony Brook University and researchers at Memorial Sloan Kettering Cancer Center grouped kinases by qualities related to their biological function. In particular, they grouped for the first time kinases by their response to drugs. This approach is more similar to arranging artworks by subject or artistic period as found in many museums, rather than alphabetically.

“We found that there are surprisingly huge differences among the kinases, as some are inhibited by only a few drugs and others by many. We can also demonstrate that a specific shape in these indiscriminate kinases enables them to be this way,” explained Seeliger. He believes that this novel method of grouping kinases creates a new view on the kinase family of drug targets and may help to build a poly-pharmacological approach to drug targeting kinases that could replace the current approach of kinase-targeting drugs that has drawbacks.