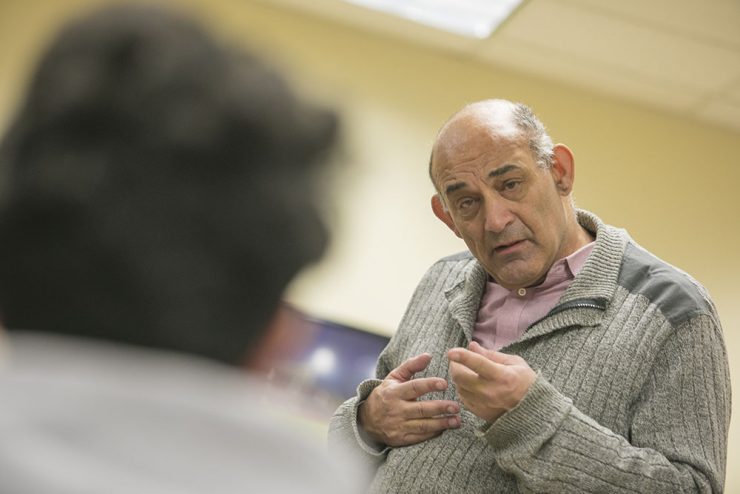 The courses may be provocative, even quirky, but they’re academically sound and perfect for the purpose they serve — to acclimate first-year students to engagement with faculty in a smaller classroom setting while learning about subjects that ignite their interest and imagination.

Stony Brook’s required spring semester classes for freshmen, known as 102 Seminars,  offer a diverse menu — ranging from ethical decision-making, to navigating the cultural politics of diversity, to branding oneself, to finding balance between life and work, to social entrepreneurship, and more. Recently students have learned about the history of the hamburger, garbage in our world and the use of yoga to further academic wellness.

After completing the seminars, which run for either 10 or 14 weeks, each student receives one credit and a letter grade, while starting off their Stony Brook experience on a firm academic footing.

The 102 courses also differ from regular curriculum-based courses in that they are offered by each of the six Undergraduate Colleges on campus: Arts, Culture and Humanities, Global Studies, Human Development, Information and Technology Studies, Leadership and Service, and Science and Society.

“The First Year Seminars are an important component of our overall student success strategy,” said Charles Robbins, Vice Provost for Undergraduate Education and Dean of the Undergraduate Colleges. “Building on their experiences in the Fall 101 seminars, students in the spring have the opportunity to interact with a faculty member through a small seminar experience.”

“In addition to the topic being covered in the seminars, students learn to interact with faculty and in many cases form relationships with other students and the faculty member that last throughout their time at Stony Brook and following graduation,” Robbins said. “Stony Brook is one of only a very few universities that offers this level of connection to faculty during their first year.”

“Faculty receive a very modest stipend for offering the seminar — they are very much ‘labors of love,’” Pittinsky said. “The faculty are drawn to the chance to offer courses to small cohorts of students and the chance to work with students on eclectic topics for which they have great passion.”

Pittinsky’s own course, titled Brave New World: Technology Society, comes with a caveat: “This is a discussion-oriented course. I want and expect you to speak your mind during class. If you agree or disagree with anyone in the classroom — including me — tell us why.”

The students have just returned from winter break and are rolling into Jon Friedman’s LDS 102.6 Cultural Politics of Diversity Class, which happens for many to be the first class of the day. Some haven’t even had the luxury of breakfast and yet here they are listening to Friedman’s teaching fellow, Andrew Scott, talk about growing up in Rochester, New York, in a mainly white suburb. It’s a typical Stony Brook class, culturally diverse, and Scott is speaking from the heart — telling the students about his demographic, which is one that experiences a high disparity in wage gaps.

Following this introduction, Professor Friedman takes over. He shares his opinions with the class, peppering his remarks with cultural and anecdotal references that provoke interaction.

“When someone you don’t know says that they don’t like you because of your name or where you’re from, that is ignorance,” he says.

Some 102 courses celebrate the lighter side of culture. For example, Professor David Rubenstein teaches a course about the technological innovations that appear in the Marvel Cinematic Universe Movies. “I insist that my students have fun in everything they do,” he says. Even in his regular curricula Rubenstein has been known to ask his students to play tug-of-war in class to illustrate a concept about muscle contraction. His students have also created parodies of popular songs to illustrate biomaterials concepts.

“I’ve met some amazing freshmen that are as enthusiastic about the Marvel movies as I am,” he said.

Professor Aruna Sharma’s Introduction to Indian Music and its Influence on Bollywood Cinema resonates strongly with Stony Brook’s South Asian students and provides an intriguing slice of insight into Asian culture for non-Asian students as well.

“The seminars enable students to dabble in a topic that is outside of their major or adds to their major as well,” said Aksa Babu ’22. “For me, taking a class related to my Indian culture has allowed me to feel closer to my roots and alleviate my brain from the stresses of majoring in a science course. A 102 class, in my opinion, is meant to encourage well-roundedness and allow students to explore interests that their major may restrict them to. It is also very enjoyable to see the other ethnicities in our class embrace Indian culture and connect to it on a different level than the students with Indian roots do.”

Dhwani Patel ’22 had this to say about the course: “I took this class because I come from an Indian background and growing up my family forced me to learn Indian classical music. The class gave me a new perspective on how Indian classical music has given birth to the Bollywood music and made me realize how closely both of the styles are connected.”

According to her classmate Quinn Merrick, “It isn’t too much of a time commitment and Professor Sharma maintains a fun and accepting atmosphere and actually likes it when we make mistakes and we implement the knowledge we’re being taught.”

Given the current interest in crime drama programming, it is no wonder that Professor Jeannie Guglielmo’s Forensic Science Chronicles class is a big draw.

As chemical engineering major Jamie Decoster ’22 explains, “I was really interested in forensic science in high school but never had the opportunity to take that class until I got to Stony Brook. I also wanted to take the class because I heard that the professor worked in a crime lab. I think my favorite part of the class is hearing the stories of real cases. She has brought in evidence collection kits that we are allowed to touch and see and that is really interesting.”