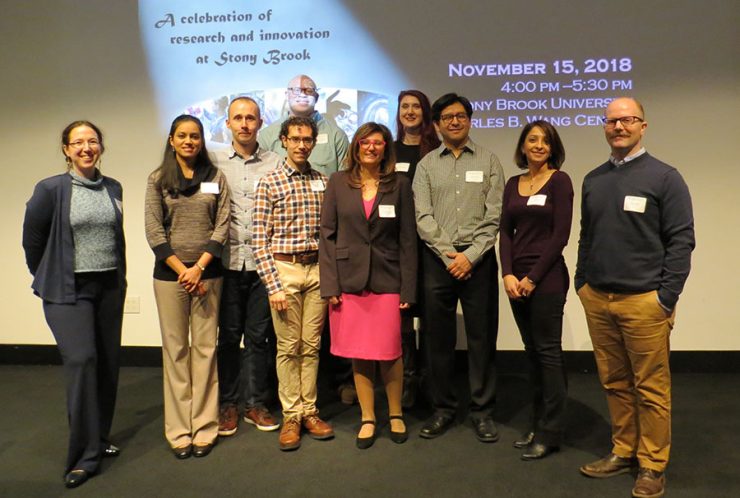 “There’s one thing that unites people across all political and socioeconomic backgrounds,” suggested Geosciences Postdoc Steven Jaret during his talk at  SBU Postdoc Spotlight. “The one thing that everyone agrees upon is that dinosaurs are awesome.”

During the November 15 event, 10 Stony Brook postdocs each had a mere five minutes to convince an auditorium of students, faculty and staff—and the judges—that their own science was equally awesome.

The Postdoc Spotlight speakers spent the previous several weeks designing five-minute presentations that could convey the excitement of their research for a broad audience of non-specialists. With intensive coaching from the Alan Alda Center for Communicating Science and from each other, speakers set aside jargon and instead used tools like stories, analogies and visuals to share their discoveries.

Evgenii Boriushkin from the Department of Medicine shared how a family health crisis inspired him to apply his work on blood vessels to understanding heart attack risk. Physicist Carlos Perez Lara compared the heavy atomic nuclei he collides at Brookhaven National Lab to sumo wrestlers.

Neuroscientist Lindsey Czarnecki invited the audience to imagine the smell and taste of popcorn, stimulating the part of their brain she studies in her research.

“These are key skills that our postdocs need now and for the next stages of their careers,” said Kathleen Flint Ehm, Director for Graduate and Postdoctoral Professional Development. “Whether it’s giving a faculty job talk, advocating with a congressman or conversing with family at Thanksgiving, the ability to communicate one’s research to any audience is fundamental. Win or lose, all our speakers strengthened their skill in this area.”

While Flint Ehm emphasizes the professional development gained through participation in the Postdoc Spotlight, the event is also a competition, with awards sponsored by the Office of the Vice President for Research. First place for best talk was awarded to Czarnecki for her presentation on “The Taste of Things to Come,” a study of the different ways the taste center of the brain understands taste and smell.

Second place was awarded to Jaret for “Surviving the Apocalypse: A Fossil Story,” where he finds evidence of a delayed extinction event following the meteor impact that eradicated the dinosaurs. Finally, James Robertson, IRACDA postdoctoral scholar with the Laufer Center for Physical and Quantitative Biology, won third place for “Better Living Through Computational Chemistry” on his computer simulations of protein structures that can speed up the drug discovery process.

The SBU Postdoc Spotlight is held each Fall to bring together the Stony Brook postdoctoral community around the common thread they share: a love of research. And, sometimes, dinosaurs.

View all the talks: