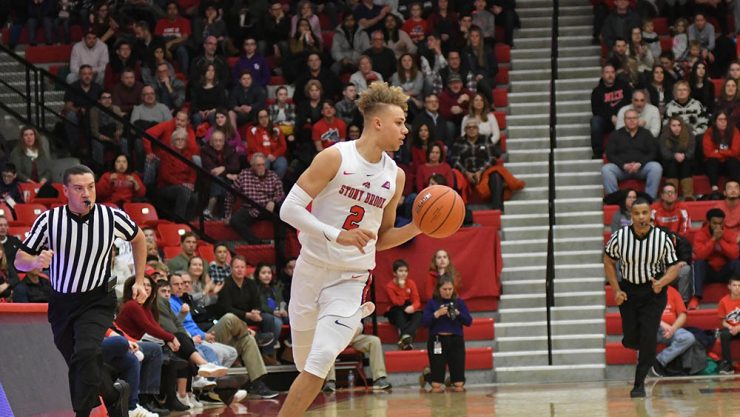 After hitting the go-ahead jumper to give the Stony Brook men’s basketball team the lead in regulation, freshman Miles Latimer made the big play in overtime, blocking an Albany shot as time expired to seal the Seawolves’ 67-66 victory over the Great Danes on Wednesday night, improving Stony Brook to 5-0 in America East play and putting them in sole possession of first place in the league.

Redshirt-junior Akwasi Yeboah recorded his fifth double-double of the 2018-19 season, scoring 21 points and hauling in 11 rebounds, while senior Jaron Cornish hit the game-winning three in overtime en route to a 14-point night.

“This game was a street fight for 45 minutes,” Coach Jeff Boals said. “It was a battle and our guys were ready for it.”

“Any time you can go on the road and get a win is great,” Boals said. “Our guys are battle tested and tonight was another example of their toughness.”

The Seawolves return home for a pivotal battle for first place in the America East, taking on Vermont Saturday night at Island Federal Arena.