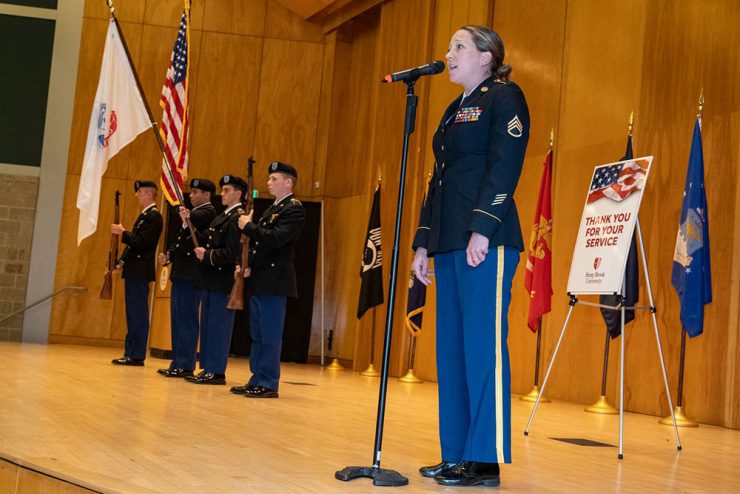 Student veteran Ryan O’Keeffe, a senior in the College of Business who served in the United States Marine Corps, emceed the event, held in the Sidney Gelber Auditorium in the Student Activities Center.

“While the landscape of our country and world remains ever changing, a special subset of our population continues to raise their right hand and solemnly swear to support and defend the Constitution of the United States against all enemies foreign and domestic,” said O’Keeffe. “Today, we honor the service of all Americans who have answered the call to duty, and Stony Brook is grateful to have so many veterans as part of our community, including many student veterans who have paused their education to serve their country.” 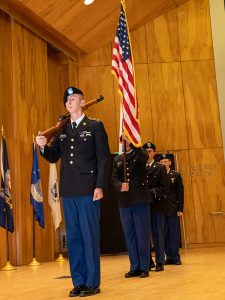 Jennifer Lucas ’09 sang the National Anthem and Daniel Jones, a graduate student in the Department of Music, College of Arts and Sciences, played “Taps.”

“I spent time with him on the base while he did his reserve service,” said McInnis. “I was consistently impressed with the pride and sense of duty exhibited by the men and women who were serving their country. These qualities are essential in sustaining any strong community, and we in Long Island benefit greatly from the networks, programs, and resources that our Long Island veterans have helped create and sustain.”

U.S. Army veteran and computer science major Chloe Mack ’23 was this year’s student speaker. She described how her father, an Army veteran of the Vietnam war, and an early interest in science fiction helped put her on the path to a military career.

“When I was 10 years old, my father took me to see Return of the Jedi,” she said. “The possibilities of distant galaxies light years away fascinated me. These fictional scenarios often involved people visiting a place they will not be able to stay, touching down just long enough to hopefully leave it better than they found it so others may benefit.”

She began to consider her future, further influenced by her father’s military experience.

“All my father’s stories had a common theme,” she said. “My father and his platoon standing between people who were doing terrible things and people who could not fight back. I would often imagine myself in similar spaces.”

She was in 10th grade when she witnessed the tragic events of September 11, 2001, a day that solidified her decision to join the military. She joined her school’s junior ROTC program and would go on to a career in the U.S. Army. After being discharged due to an injury, Mack was accepted into Stony Brook’s computer science program in 2020 and currently serves as president of the Veteran Student Organization (VESO), working to help fellow student veterans transition to life after the military.

“Being part of the veteran student organization here has provided a strong sense of belonging and camaraderie,” she said.

Joan Furey ’72 — a Vietnam War veteran and member of the first graduating class of Stony Brook’s School of Nursing who was honored with a Lifetime Achievement Award earlier this year — was the keynote speaker.

“War is something outside of our normal experiences, of which we have little control and where young men and women from all walks of life are brought together under the most adverse of circumstances and called upon to deal with extreme situations,” she said. “Acts of courage, heroism, self-sacrifice, and commitment are commonplace and these shared experiences forge a bond stronger than steel, one that lasts long after the experience has ended.”

Though Furey was lucky enough to return home, she noted the many who did not.

“Many service members made the ultimate sacrifice and we must always remember that,” she said. “President John F. Kennedy once said, ‘A nation reveals itself not only by the people it produces, but also by the people it honors and the people it remembers.’ Our veterans did what needed to be done, and many made the ultimate sacrifice to secure our way of life. That is no small thing. The veterans here today not only defended this nation, but transformed it and strengthened as civilians. Be proud of these men and women and take the opportunity to thank them for their service. Without their commitment to us, we would be less free and less secure as a nation.”