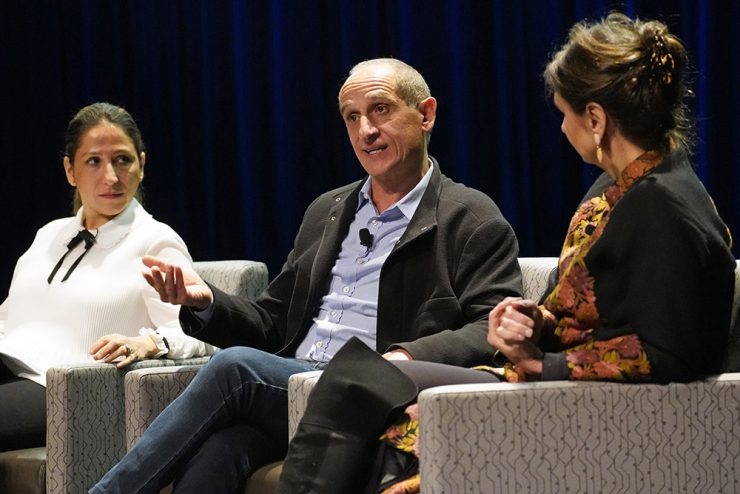 On September 16, 2022, a 22-year-old woman named Mahsa Amini died in Tehran in the custody of Iran’s morality police. Her death fueled immediate unrest that was at first focused on the state-mandated hijab for women, but has since morphed into an uprising that has shone a spotlight on women’s rights not only in Iran, but around the world.

The Marie Colvin Center for International Reporting at the School of Communication and Journalism and the Office of Diversity, Inclusion and Intercultural Initiatives hosted a conversation on November 16 in the Charles B. Wang Center that featured a panel of experts in a spirited discussion that pondered the potential impact of these uprisings on the future of the Islamic Republic of Iran.

Sara Lejuez, an assistant professor of practice in the School of Communication and Journalism, moderated the panel, which featured Leili Soltani, director of Voice of America’s Persian Language Broadcast to Iran; Hadi Ghaemi, founder of the Center of Human Rights in Iran; and Roya Hakakian, a journalist and human rights activist who came to the United States as an Iranian refugee. After a brief welcome by Stony Brook University President Maurie McInnis, Vice President for Equity and Inclusion and Chief Diversity Officer Judi Brown Clarke addressed the attendees.

Christiane Amanpour, the British-Iranian chief international anchor for CNN, offered some pre-recorded remarks. “Iranian girls and male allies are standing up and protesting for freedom,” she said.  “They are using their moral and physical courage to protest as they’ve never done before for freedom. They don’t want a patriarchy telling them what to do with their bodies. We can take pride and joy from these ordinary people fighting for their rights. Everyone one day has to face the choice whether they are going to be courageous or defer. It’s so important that the Marie Colvin Center for International Reporting is addressing these important issues.”

Lejuez began by introducing herself as an Iranian-American who lived in Iran up to age 19 “under the most oppressive regime.”

“Authorities suppressed our rights,” she said. “Women face discrimination regarding marriage, divorce, employment, and political office positions and are treated as second-class citizens. The brave and courageous women in Iran are no longer willing to settle for this. They are fighting for their integrity and dignity.”

Describing the conflict as the “first women-led uprising of our time,” Lejuez called it both a source of fear and a source of pride.

“What they are standing for is their most basic rights, rights we take for granted in the West,” she said. “Iranians’ lives are in danger and every minute we stay silent puts someone else at risk. I’m honored to moderate this talk.”

Soltani delivered grim statistics — nearly 350 protesters killed and 15,000 more arrested by Iranian republic and security police, many under the age of 15.

“Many more face potential jail or execution by Iranian authorities for ‘waging war against God,’” she said.

Soltani also pointed out that the demonstrations are notable for being women-led.

“Two women journalists broke the news of Mahsa Amini’s death,” she said, adding the alarming news that the reporters, Niloofar Hamedi and Elaheh Mohamadi, are currently being held in solitary confinement, charged with acting against Iran’s national security and working with the CIA, charges that can carry the death penalty.

Ghaemi tied the protests to a large-scale societal breakdown that encompasses the country’s politics, economy, social views and legal system.

“The world has looked at Iran as a nuclear problem, but has ignored that fact that 85 million people live there and things have been imploding,” he said. “Since 2016 all pillars of Iranian society have been falling, and the youth are the ones paying for it. That’s why they are the ones revolting.”

Hakakian cautioned against thinking of the uprising as simply a “head scarf revolution.”

“The head scarf is a symbol of all the societal problems that have been underneath for the past 43 years,” she said. “It was women who were forced under the veil who have said ‘we don’t want it.’ They are the vanguards of this moment because no one else would do it.”

Hakakian also said that what’s happening in Iran needs to be seen in a global context of feminism in a historic event that’s relevant worldwide, a sentiment echoed by the doctoral student.

“It’s very difficult to be a woman in Iran,” said the student. “We just want a normal life where we don’t have to plan to start leaving our country when we are teenagers. We want everyone, no matter ethnicity and gender, or how they dress to have a chance to express themselves.”

At the conclusion, the common theme that emerged was that the protests in Iran symbolized the young voices of the present rejecting the past, and staking their claim to a better and fairer future.

“This is the new generation of Gen Z,” said Lejuez of those fighting in Iran. “They are not tolerating it anymore. What they’re asking for is freedom of choice. It’s not just about the hijab or religion. They want freedom and democracy.”