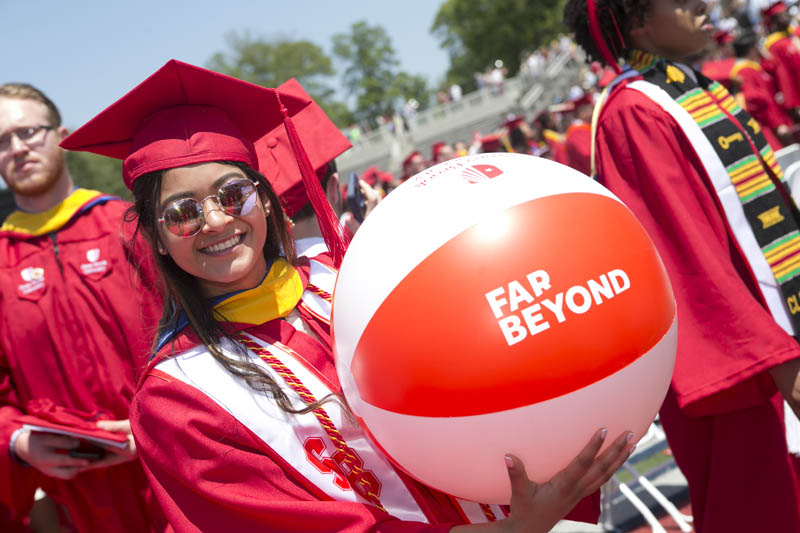 Stony Brook University will launch a record 7,350 students into a future far beyond the ordinary as the University’s 58th annual commencement ceremony takes place Friday, May 18, beginning at 11:00 am in Kenneth P. LaValle Stadium.

Poet laureate Tracy K. Smith  will receive the honorary degree of Doctor of Letters, recognizing the tremendous impact she has had on the world as a poet and as an educator.

Degrees to be awarded to Stony Brook graduates include 4,530 bachelor’s, 2,010 master’s, 620 doctoral and professional, and 265 certificates.

Graduates range in age from 18 to 77 years and represent 42 states and 73 countries.

Tracy K. Smith is an acclaimed poet, author and educator dedicated to sharing her passion for poetry and prose with the world. Her work has been revered for its ability to forge connections, blending personal observations on pop culture with weightier universal themes such as science and religion. In her role as the 22nd poet laureate to the Library of Congress for the United States she traveled the country, raising awareness of poetry and its value in our culture.

Smith’s love of poetry began at an early age, when she first read Emily Dickinson in the fifth grade. She continued studying her craft as a major in English, American Literature and Afro-American Studies at Harvard University. While at Harvard, she joined the “Dark Room Collective,” a reading series for writers of color. After graduating from Harvard, she went on to receive her MFA from Columbia University in 2003.

That same year, Smith published her first collection of poetry, The Body’s Questions. This work earned the Cave Canem Poetry Prize, a first-book award bestowed to black poets of African descent. Four short years later, her second collection, Duende, also received critical acclaim, earning the James Laughlin Award and the Essence Literary Award. Her third collection, Life on Mars, reached the pinnacle of success as it was recognized with the 2012 Pulitzer Prize in Poetry. Her latest poetry collection, Wade in the Water, was published in the spring.