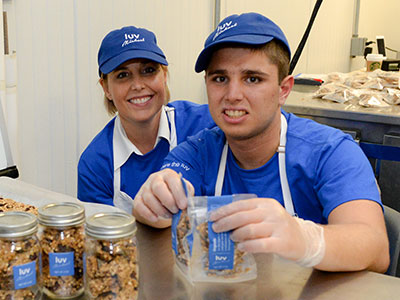 When Jason Lantier played football for Stony Brook in the early 2000s, his coach knew that the former defensive lineman would make a career of helping others.

Sam Kornhauser, now the director of Athletic Advancement and Alumni Relations, said of Jason, “He was team-oriented and willing to sacrifice. Jason was always a giver. He came from a tough family environment and worked hard. I had no doubts that he would succeed.”

The lessons Lantier learned on the field now serve him well in his role as co-founder of Luv Michael, a granola manufacturing company designed to create jobs for individuals on the autism spectrum. A 2002 alum who is about to complete his Stony Brook MBA, Lantier is a board-certified behavior analyst and co-founder of the National Federation for Autism.

The seeds of Luv Michael were planted during Lantier’s years as a Stony Brook undergraduate. He said that his roommates, computer programmers Daniel Kivatinos ’01, ’02 and Michael Nusimow ’01, modeled hard work. They went on to found the successful electronic health records platform, drchrono, in 2009 and have been recognized twice by Stony Brook’s 40 under Forty program.

Surrounding himself with innovative thinkers like Kivatinos and Nusimow proved inspirational for Jason as he sought to emulate their success. “I remember them telling me, ‘wherever you see paper, you see the room for innovation and physical software.’ And whenever I visit them in California, I just shared different ideas with them and they love working through the ideas with me and encouraging me to work towards my vision,” said Jason.

As an undergraduate, football had become a metaphor for success through hard work for Jason. “Sports, like business, has a lot of ups and downs. Even if you are tired or in pain, you need to keep going and accomplish your task,” Jason said.

In 2002, while attending Stony Brook, Jason began working with autistic individuals in more than 25 group homes as a direct care staffer. He went on to become a staff trainer, behavior specialist and clinical supervisor.

As a board-certified behavior analyst with more than 12 years’ experience working with the developmentally disabled population, Jason saw an opportunity to combine his classwork with entrepreneurship when Stony Brook Medical School alumni Drs. Lisa Liberatore and Dimitri Kessaris proposed a business venture, Luv Michael, to him.

“The business was developed with the initial intention that Lisa and Dimitri’s adolescent son, Michael, who is on the autistic spectrum, would have a job someday and safely use his skills and passion,” Jason said. “The idea for the name came after the couple gave a gift to someone in Michael’s name, signing a card, ‘Love, Michael.’ That domain name wasn’t available, so it became Luv Michael, and it worked out great.”

In spring 2015, Jason took the MBA 522 course, “Industry Project” and he made his venture, a food business, his class project, benefiting from feedback from Professor Ralph Aguayo and students in the class.

Jason chose a food business because Michael is passionate about cooking. Jason cited a study from AJ Drexel Autism Institute finding that two-thirds of young people with autism have neither a job nor educational plans during the first two years after high school, and for a third of those adults, this pattern continued into their early 20s.

“This problem is one of the main reasons that businesses like Luv Michael are so important,” said Jason.

Luv Michael must meet the challenge of creating products — gluten-free, organic natural granola mixes — while concurrently providing support and training for its employees, who volunteer to work for a short time based on their individual skills on four different “granologist” levels. The company also provides a curriculum that is geared for them to acquire New York State food-handlers certification, which will qualify them to work in any New York kitchen.

Other jobs at Luv Michael range from product preparation, including labeling, packaging, sealing and boxing. The more verbally skilled employees can represent the company’s sales team and work at food shows, for example, while computer-savvy individuals produce Excel spreadsheets to aid the sales team. Additional jobs will be created as the company expands.

By fall 2015, Luv Michael began preparing its product, which is now available in 22 Manhattan stores, and has plans to reach 100 stores by the end of 2016.

News of the fledgling company spread and CBS recently featured Jason and Luv Michael on a news segment.

This past September, Jason spoke at the conference “Autism: The Next Generation of Treatment,” introducing Matthew Lerner, assistant professor of psychology, psychiatry and pediatrics at Stony Brook. “I spoke about the need for employment of the autistic population and then I introduced Luv Michael and explained how it could help put a dent in the employment problem for this growing segment of our population,” said Jason.

“It makes me feel good to give hope to young people who otherwise have limited options,” he said. “It makes me truly satisfied, however, to show how talented these individuals are and how we just need to provide them with an opportunity.”

Rick Gatteau, Vice President for Student Affairs and Dean of Students, has issued an update to students regarding various issues related to the coronavirus crisis. The message reads as follows: I hope that you and your...

Coming Back Safe and StrongCOVID-19Student Spotlight

The University has released a message to F-1 international students concerning recently announced policy applying to the the Student Exchange and Visitor Program. The message — signed by Jun Liu, Vice President/Vice...