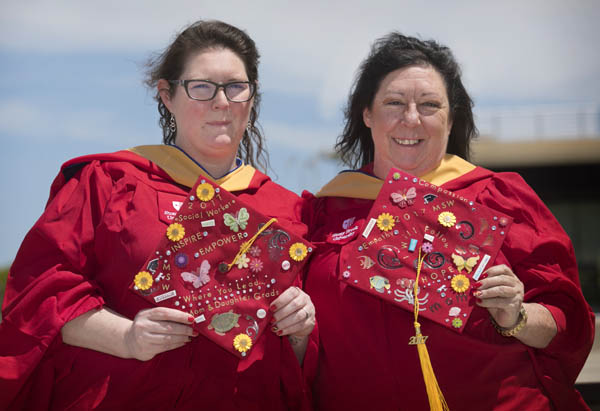 When Stephanie Dick graduates on Friday, May 19, her mother Judith Fischer won’t be sitting in the bleachers, tears of joy streaming down her face.

Instead, she’ll be on the same stage, beaming with pride over her daughter’s accomplishment and basking in her own.

Both mother and daughter will be accepting the same Master’s degree in social work from Stony Brook University’s School of Social Welfare, having walked a similar academic path and helping each other along the way.

“I enjoyed having my daughter in the same classes with me,” Fischer said. “Like me, however, Stephanie has an independent streak, so she needed to learn these things on her own and find out where they would fit into her career.”

Fischer and Dick have drawn inspiration from each other’s collegiate experiences. Both began their academic sojourns at Suffolk Community College but their ensuing paths took a serpentine route.

Dick transferred to Stony Brook, embarking on a two-year BS degree with the School of Social Welfare in 2014, from which she graduated in 2016. She then completed an advanced-standing one-year Master’s in Social Work program.

Fischer decided to apply for the two-year Master’s in Social Work program in 2015 and that is how they wound up on the same stage, each graduating with a Master’s degree in social work in the same year from the same university.

Looking back, Dick said that a couple of academic experiences fired her up and gave her purpose in those formative academic years. She explained that she had come off an adrenalin rush directly from the highlight of her undergraduate experience in the bachelor of social welfare program.

“Back in early 2016, a group of my cohorts and I were sickened by the situation with the (lead-contaminated) water in Flint, Michigan and we teamed up to seek donations,” Dick said. “We collaborated our efforts and obtained an 18-wheeler truck for free to drive there and deliver all of the donations we collected, which amounted to approximately 10,000 bottles of water and 20 more gallon jugs of water.”

But before that, from September 2015 to May 2016, she had enjoyed her first eye-opening internship with Community Housing Innovations, which helped homeless families and individuals find housing, employment and other resources they lacked.

“Many people harbor biases when it comes to the homeless population but I have learned that sometimes it is our state and federal systems that fail these people,” Dick said. “It is not their choice to be homeless and most want nothing more than independence from the government assistance programs.”

What’s more, she said she was inspired by her mother who resumed her education as a single parent with a college-aged child. But when her daughter embarked on a psychopharmacology course that gave her difficulty, Fischer took the course again so she could lend her knowledge of that subject as well.

“Having taken the course when she was an undergraduate, she was able to help me understand much of the information connecting medications, illnesses and brain functions,” Dick said.

When it came to the classroom, the mother and daughter pairing became a hit among professors and fellow students. They sometimes sat next to each other in two of the classes they shared, even passing notes like a couple of dorm-mates.

“The professors were shocked that my mother and I were going to be graduating together, and they were impressed with our enthusiasm. The students thought it was awesome we were going through this together,” Dick said.

All along, Fischer aspired to be a role model outside of the classroom, sharing life lessons with her daughter.

“As a single mother, I made it a point to have an open mind, be a productive part of society and to show my daughter that people deserve respect and compassion,” she said. “I have always had an innate sense that people in this world who do not fit into the ‘norm’ of society are judged, labeled unjustly and treated unfairly. This has never been acceptable to me.”

Although mother and daughter look back at their journeys with satisfaction, both acknowledge that it wasn’t easy despite the support they gave to each other.

One challenge surfaced this past July when Dick was diagnosed with blood clots in her right leg and foot that led to 30 hours of surgery. When her foot didn’t heal, she underwent amputation of two toes in November.

While recovering, she was forced to Skype into her classes and seek help from fellow students to share their notes.

She missed so much of her fall internship that she needed to complete it this spring, and will finish her follow-up spring internship in August. She is allowed to “walk” for commencement, but will not receive her diploma until she completes the spring hours.

“As her mom, it was heartbreaking to watch and not be able to do anything,” Fischer said. “But Stephanie is inspiring and has never quit. She is so determined!”

Fischer’s second path led her to an internship at the Long Island State Veterans Home, which opened her eyes to the plight of our armed forces.

“I was so fortunate to work with World War II, Korean and Vietnam veterans there,” she said. “They long for someone to listen to them and share the stories of their lives. I made it a priority to not only listen to them, but also to review their therapeutic recreation program schedules on a monthly basis because these activities form the thread of their lives. It was truly heartbreaking to leave them.”

Inspired by those experiences, Fischer is seeking non-profit status so she can establish K & S Healing Horizons Inc., a transitional housing unit for veterans who suffer from Post-Traumatic Stress Disorder or who are homeless.

“The transitional housing of two to three years along with comprehensive case management services will empower our veterans with self-determination and give them the necessary tools to become independent and recover,” Fischer said. She is currently looking for sites in the Patchogue or Smithtown area.

Her daughter, meanwhile, signed up to become a board member in her mother’s organization and plans to lend her expertise with fundraising and events and by facilitating motivational group therapy with the K & S residents.

Dick’s cap reads, “Where You Lead,” and her mother’s answers, “I Will Follow.” 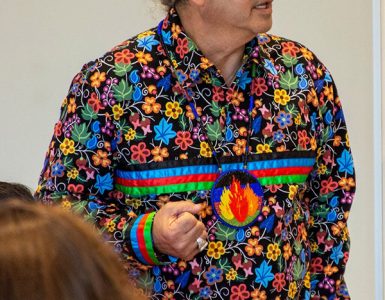