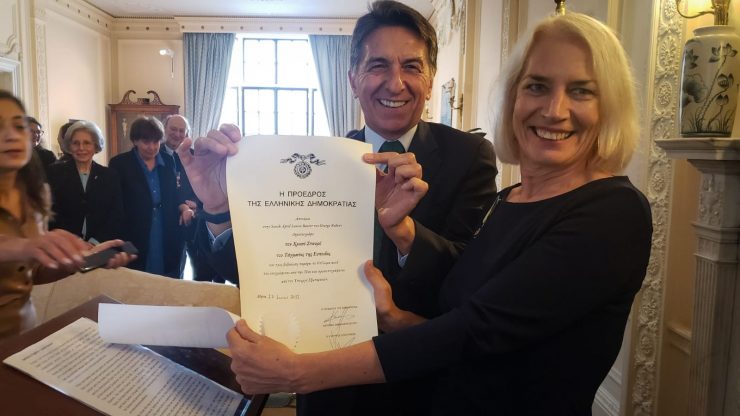 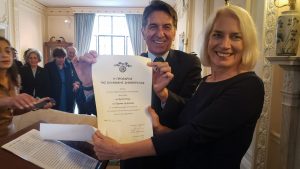 Sarah Baxter, from Stony Brook University’s School of Communication and Journalism (SoCJ), has received a special honor from the Greek government: the Gold Cross of the Order of Beneficence.

For years in her reporting for London’s Sunday Times, Baxter has written in support of the Greek government’s efforts to have the Parthenon sculptures — seized in the early 1800s and housed in the British Museum — be reunited in Greece.

“I really do believe that the Parthenon sculptures belong in Greece,” said Baxter, director of the Marie Colvin Center for International Reporting and a journalism instructor. “Since they were taken, people in Britain and of course in Greece have been arguing for their return. There appears to be a thawing now in diplomatic relations that may, someday, help to send the Marbles home.”

The Gold Cross is given to individuals for their support of the “Greek universal values of democracy, freedom and solidarity.” The award was established in 1948 and is granted in recognition of “exceptional services provided to Greece, charitable acts and outstanding achievements in the arts and letters.”

“Excellent journalism can help create a more fair, more just, more rational world, and Sarah Baxter is an excellent journalist,” said Laura Lindenfeld, dean of the SoCJ and executive director of the Alan Alda Center for Communicating Science. “We are honored by this recognition of Sarah’s work, and proud of her efforts to hold authority accountable.” 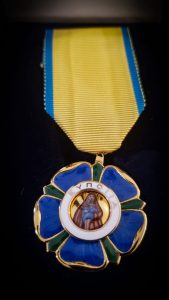 Baxter, a dual U.S. and British national, received the honor at a ceremony earlier this month in Greece.

“It all feels a bit incredible,” said Baxter. “As a journalist, of course you hope that your reporting will make a difference but you never expect to be honored for it, especially by a national government.”

She first wrote about the Parthenon sculptures, known for decades in the UK as the Elgin Marbles, in 2019. That column, in which Baxter called for the 2,500-year-old sculptures to be reunified with other fragments at the Acropolis Museum in Athens, made front-page news in Greece. That year, Baxter was invited to give a lecture in Athens and had a private meeting with the Greek president.

She has continued to cover the issue, and wrote a cover story this summer for the Sunday Times Culture magazine about a potential solution, which would see a cultural exchange of Greek treasures with the British Museum. Since then, she has continued to write about and discuss the diplomatic efforts and has appeared in a variety of Greek media outlets.