For Sarah Georges ’16, Research is Global 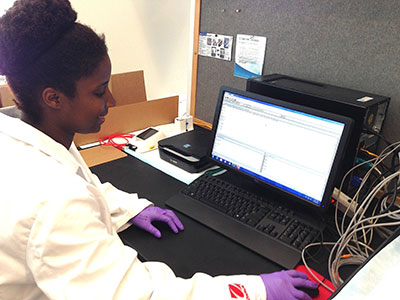 Sarah Georges ’16 is a pioneer.

A first-generation American and the first in her family to graduate from college, Sarah had to explain the value of research to her Haiti-born parents.

Curious by nature, Sarah recalls skipping recess in fifth grade to hound her science teacher with questions about the topic of the day. That curiosity only grew as she did.

At Stony Brook, that thirst for knowledge led her to learn about unlocking the mysteries of mutant viruses, vaccines and proteins, and linking stress and secondhand smoke to the role of platelets in the human anatomy.

Sarah realized that to succeed in research, she needed to embrace failure. “Sometimes an experiment doesn’t go as planned and being able to trouble-shoot is extremely important,” she says.

Her research in Stony Brook’s Wimmer Lab — investigating the roles of a certain type of protein and their sensitivity to temperature in poliovirus — has significant implications.

She also has learned is that to combat the virus, you have to understand it.

“When the vaccine for the poliovirus was first introduced, there was not much known about the actual virus itself,” Sarah says. “We learned that if you give people a weaker form of the virus that would be strong enough to cause an immune reaction to occur but weak enough to prevent sickness, people can gain immunity to it. In its eradication, the issue that is emerging is that in some communities where healthcare isn’t readily available, people aren’t getting their vaccines regularly, and a new and stronger form of the virus has been popping up.”

To keep up with the latest student research, Sarah has attended a number of conferences.

“In addition to learning about the work that other students and professors have accomplished, I got to network with students who shared many different perspectives and insights,” she says.

As an undergraduate student, Sarah spent three years working at the Standardized Patient Program at Stony Brook University Hospital. That’s where she “acted out” patient scenarios for dental, medical and psychology students to help them better understand how to interact with patients.

“What I learned most from this job is that people skills are just as important as being smart,” says Sarah. “If you can’t effectively communicate with others then you are not only doing yourself an injustice, you are also doing an injustice to the community you hope to serve.”

Service to others was a cornerstone for Sarah while at Stony Brook, where she was involved with the Golden Key Honor Society Pen Pal Exchange program through which she mentored high school students by aiding them with their research papers and poster presentations. And as a leadership and service fellow, she helped freshmen make the transition to college.

Sarah considers herself more than a scientist. “As an alumni of the JFEW International Relations and Global Affairs Program, I have taken a keen interest in global political events, and as a member of the Student African American Brotherhood, I have learned how having that perspective will allow me to bring innovation to an industry I am a part of.”

After graduating with a bachelor of science degree in bioengineering, Sarah decided to take a gap year to work as a chemist at a nutraceutical company while she applies to graduate school. Her goal is to earn a master’s degree in mechanical engineering in design and manufacturing.

“I enjoy finding a solution to a definite problem and that’s one of the reasons I want to be an engineer in industry,” Sarah says.

“I would love to work oversees in a country such as Germany, where the tech industry is really booming.”