Joanna Kiryluk, PhD and Sandeep Mallipattu, MD have been named recipients of the Presidential Early Career Award for Scientists and Engineers (PECASE) — the highest honor bestowed by the US government to outstanding scientists and engineers who are beginning their independent research careers and show exceptional promise for leadership in science and technology. The PECASE acknowledges the contributions scientists and engineers have made to the advancement of science, technology, education, and mathematics (STEM) education and to community service as demonstrated through scientific leadership, public education, and community outreach.

Joanna Kiryluk is an associate professor in the Department of Physics and Astronomy in Stony Brook University’s College of Arts and Sciences. Her research focuses on neutrinos and uses the IceCube observatory at the South Pole, which is the largest underground neutrino detector in the world. She also received a 2016 National Science Foundation CAREER Award to support this work, which aims at explaining the origins of the most powerful cosmic accelerators in the Universe. She and her colleagues target the energy characteristics and composition of a diffuse flux of highly energetic neutrinos. Her proposed precision measurements will confirm or refute theory predictions for astrophysical neutrino sources and cosmic acceleration mechanisms. Kiryluk is involved in educational and outreach work in collaboration with the Stony Brook University WISE (Women in Science and Engineering) Program, designed to engage female students who have ability and interest in mathematics, science, or engineering in the excitement and challenge of research.

Kiryluk earned her PhD in Physics from Warsaw University in Poland and worked at the University of California Los Angeles, the Massachusetts Institute of Technology, and Lawrence Berkeley National Laboratory.

Dr. Mallipattu is chief of the Division of Nephrology and Hypertension and the Dialysis Clinic, Inc.-Martin Liebowitz Professor in Nephrology in the Department of Medicine at the Renaissance School of Medicine. He is recognized for his research on identifying mechanisms involved in the progression of chronic kidney disease; specifically, he investigates the mechanisms that regulate proliferation and differentiation of epithelial cells in the kidney. Dr. Mallipattu has the technology to harvest cells from patients and generate new kidney cells at the microscopic level; the healthy cells can then be grown in a petri dish with some organization into 3D structures called organoids. These efforts could someday lead to actually building a functional kidney. He was also recognized for this research as a 2019 Discovery Prize finalist.

Dr. Mallipattu earned a BS in Biomedical Engineering at the University of California, San Diego, then earned his MD from Boston University School of Medicine.

PECASE award winners will be honored on July 25 at a special ceremony in Washington, DC.

Some students know it as a scenic shortcut from the Main Campus to South Campus and back. Others use it as a “living laboratory” to study its geographical features and learn about its rich plant and animal life. For the... 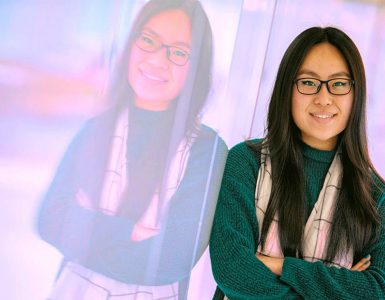 The first-generation college student says earning scholarships is her way of thanking her parents for their support and taking ownership of her future.