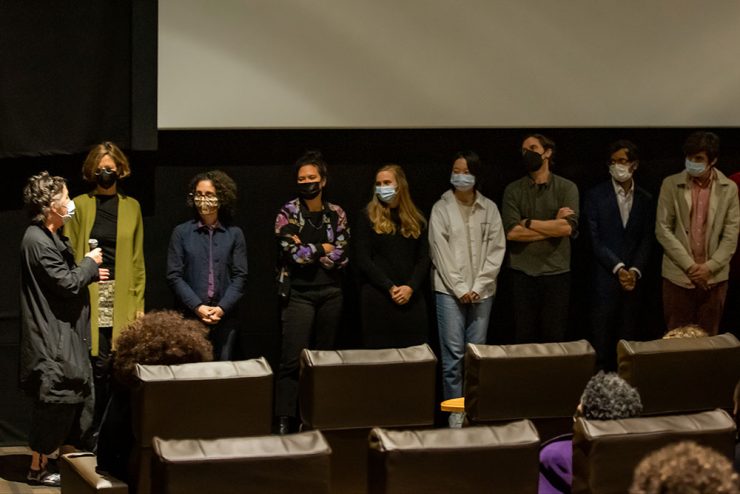 On Saturday, October 23, 2021, for the first time since the pandemic lockdown, the Stony Brook MFA in Film hosted its annual end-of-year Production I and Production II screenings at the Cinepolis movie theatre in Chelsea. 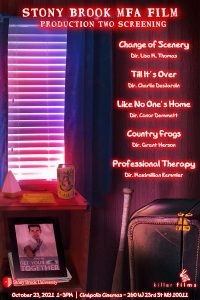 The in-person screening experience is essential to filmmakers. In introducing the Production I films, associate program director and screenwriting professor Jennie Allen said, “Film is meant to be seen and received by an audience, from the moment of conception through writing, casting, shooting, editing — we make movies because we want to communicate some truth about the way we see the world. It’s all for this moment. Congratulations to the filmmakers on arriving here, intact! And I know that everyone will find something to connect to in these stories, made with grit, heart, humor, heartbreak…”

Production I Producing Track student Audrey Wick described how as an international student, she and her classmates began their film school journey during a global pandemic — scattered across the globe and wildly different time zones, attending their New York-based film school via Zoom during the wee hours of the morning from Switzerland, India and China, and doing directing exercises within their COVID-safe pods in their home countries, which made this in-person collaboration and in-person screening all the more meaningful.

Executive Director of Programs in Film and Television Magdalene Brandeis thanked Robert Reeves, Carla Caglioti, Scott Sullivan and all the faculty, particularly Jordan Roberts, who was in the trenches with students’ edits. Introducing the Production II screenings, Brandeis said, “This is really emotional for me. In March 2020, we sent students off with their greenlit projects and their gear, and then had to pull the cameras from them at lockdown, before they got to shoot a single frame. We’ve been promising this screening since then. It means a lot to be finally be able to do this.”

Production II producer Parker Cowden said, “It’s been quite the journey to get to this point, but I’m so proud of everyone for staying the course and making such amazing films. Filmmaking in general is challenging, but doing it during a pandemic adds even more layers of difficulty. It speaks volumes about this class and I feel truly lucky to be a part of it.” 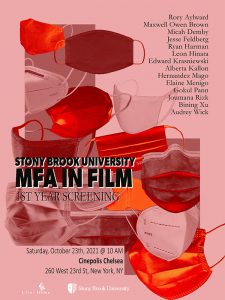 Perry Blackshear reiterated this thought. “I am incredibly proud of this year,” he said. “They completed films during this otherworldly time, work they cared about, while truly having each other’s back. I’m so impressed by what they did together and the filmmakers they have become.”

After the screenings, the students talked about their movies and took questions from the audience.

“Especially after all the work and uncertainty the past years, it was nice to see all the films up on the screen like that,” said thesis student Conor Demmett.

Legendary indie film producer and MFA Artistic Director Christine Vachon said, “This is just the beginning, that’s so exciting. You’re all extraordinary storytellers. Every single film had something really special and unique to you in it. And I can’t wait to see what you do next.”

Production I Producing Track student Rory Aylward put it well: “We’ve been through some dark times lately but there are better days ahead and it will be artists who lead us out of the darkness.”