Digging Up the Past is in Benjamin Utting’s ’16 Future 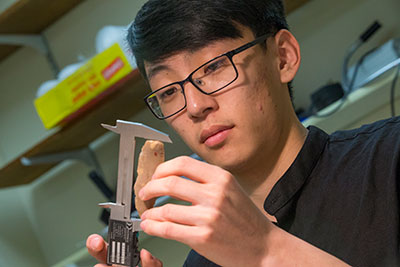 Sometimes a once-in-a-lifetime opportunity is just a matter of being in the right place at the right time.

This fall Benjamin Utting ’16 will be a graduate student at one of the top universities in the world, University of Cambridge, thanks in large part to Stony Brook’s Study Abroad and Exchange programs.

“I think that part of my successful application was due to having studied at University College London’s (UCL) Institute of Archaeology, which is a very prestigious program,” said Benjamin.

Stony Brook’s Department of Anthropology enjoys an exchange program with UCL, where Benjamin was enrolled from January 2015 to June 2015.

After completing the UCL program, Benjamin applied to Cambridge on the advice of his mentor, Professor John Shea, who was aware of that school’s stellar archaeology program and knew that it aligned with Benjamin’s diversified research interests.

On his application to Cambridge, Benjamin listed his experience in the subfields of lithic technology and brain evolution.

Although he has not yet been on any archaeological digs, Benjamin said he is excited that his graduate degree will involve field research in northern Vietnam. “In the field of human dispersal studies, two of the most mysterious areas are what are now present-day Iran and Southeast Asia.”

His first indication that archaeology would become a part of his life was when at 6 years old he went on a trip to the Metropolitan Museum of Art in New York City with his grandfather. “I was astounded by the magnificence of an exhibit on Assyrian winged bulls, also known as lamassu,” said Benjamin. “But even though I was exposed to archaeology at a very young age, I never considered it a career option until I took ‘Introduction to Archaeology’ with Professor John Shea.”

In what turned turned out to be a surprising change of plans, Benjamin had applied to Stony Brook because he had heard great things about the marine biology program, but he spent four years looking for clues about past civilizations rather than researching life in the present.

He also discovered a love for plants.

“They play an enormous role in everyday life and an equally important role in prehistoric life,” Benjamin said. “Plants provide some of the best clues in solving archaeological puzzles, whether we are looking into the origins of agriculture or reconstructing climate from pollen samples.”

Uncovering the past also has a human face.

“There’s something really thrilling about handling a stone tool that was last touched by an extinct hominin,” said Benjamin.

There is also a pragmatic aspect to consider.

“Anthropology is an incredibly exciting discipline and one that is projected for growth by the U.S. Bureau of Labor Statistics,” said Benjamin, who belonged to the Undergraduate Anthropology Club.

The club hosts a number of events during the year including a Goat Roast; seminar with the Alan Alda Center for Communicating Science; and a fall harvest festival. The Goat Roast, in its 22nd year as one of Stony Brook’s longest-running traditions, is open to all students. It is a chance for those studying anthropology to learn to make stone tools under the guidance of Stony Brook faculty and practice their skills on a goat carcass.

Benjamin hopes to return as an educator and researcher. “That would be an excellent way to give back to the community where it all began for me,” he said.