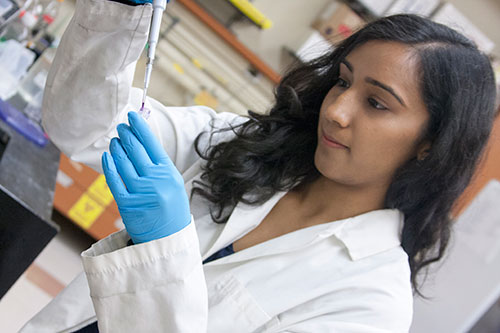 When biochemistry major and University Scholar Jessica Hundal ’16 heads to Northwell School of Medicine at Hofstra University this fall, she will be taking with her a wide array of high-level skills that she learned at Stony Brook, bringing her closer to her goal of becoming a well-rounded physician.

Jessica took advantage of every opportunity she saw, as each organization she joined, every lab procedure she mastered and each internship she accepted led to another eye-opening experience.

The Nesconset, New York, native credited Fundamentals of Biology: Cellular and Organ Physiology, which she took during the second semester of her freshman year, with solidifying her appreciation for all the processes that drive the human body.

“It is a notoriously difficult course at Stony Brook, but I found that I truly enjoyed studying the subject matter,” Jessica said.

Fortunately for her future patients, that was just the beginning of her quest for excellence. Jessica honed her research skills in Professor Laurie Krug’s biology and biochemistry labs, where she helped design mutants of a protein in a herpes virus. Her goal? To understand which specific amino acids are necessary for infection to occur and to hinder it by targeting the protein at those sites.

When she arrived at Stony Brook, Jessica worried that being a commuter student might limit her ability to form friendships or manage a demanding academic schedule. Instead, she made use of her time on and off campus to maintain a schedule brimming with activities that kept her socially engaged and performing community service.

As a member of the Sigma Beta Honor Society, she learned just how critical the need is for community service. “It helped me see that there were organizations and people right where I live who could benefit from some help,” she said.

As an animal lover, Jessica was drawn to an opening for a receptionist at the Smithtown Village Animal Hospital. That’s where she learned that dogs and cats share many of the same illnesses and treatments that their human counterparts do.

“I felt a sense of pride when I realized that helping patients was what I wanted to do with my life,” Jessica said.

On occasion her dedication to good works has taken her out of her comfort zone. Jessica had initial misgivings about becoming a Port Jefferson EMS responder because she feared she might forget certain medical procedures when under pressure. Instead, she found that the experience merely whetted her appetite to become a physician.

Perhaps her biggest surprise was that a non-science class would become her favorite course. Intrigued by the prospect of taking Introduction to Theater Arts, Jessica found herself doing the unthinkable — shedding a lab coat and treading the boards. The researcher discovered she had a creative side.

Joining a club, Mentors in Medicine, also led her to a cause that she still champions.

“It taught me about the urgent national need for bone marrow and organ donation. I know that it’s a sensitive topic for many people, so I don’t push anyone to make a decision they’re not comfortable with, but I do encourage anyone who shows interest to become a registered donor,” Jessica said.