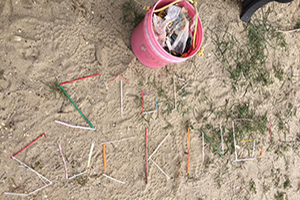 This initiative is the first product of the newly formed Suffolk County Single-Use Plastic Reduction Task Force, led by Suffolk County Legislator Kara Hahn and made up of representatives from Suffolk County, Stony Brook University, Suffolk County Community College, the Safina Center, Surfrider Foundation, and Green Inside and Out. Kaitlin Willig (MS ’17) is the SoMAS representative and vice-chair of the task force.

Plastic straws are the fifth largest contributor of marine plastics and account for approximately 7.5% of the total macro-plastic pollution in the oceans. The task force hopes to sign up 100 restaurants for “Strawless Suffolk” by Labor Day. Also attending a July 2 press conference announcing the initiative were Kimberly Williams, a current science teacher in the Smithtown School District and SoMAS alum, and Robert DiGiovanni, founder and chief scientist at Atlantic Marine Conservation Society and a former lecturer at SoMAS.

Stony Brook University has been involved with remediating marine debris since 1972, when Dr. Ed Carpenter published “Plastics on the Sargasso Sea surface” in Science. In 1989, the Waste Reduction and Management Institute (WRMI) at SoMAS was formed and has since been dedicated to dealing with the issues of marine debris and marine pollution. Kaitlin Willig’s participation in the Suffolk County task force is a continuation of WRMI’s mission.

At Stony Brook University, the Strawless movement is making progress as well.

Starbucks recently announced that as of July 9th, 2018, it has begun phasing out plastic straws from its more than 28,000 stores worldwide by 2020.  A specially designed recyclable lid will be used instead of a straw. These new lids are currently available for cold foam beverages at the Stony Brook University Starbucks locations. Paper straws will be available upon request.

This August, Stony Brook University Campus Dining will be moving to corn-based PLA straws that are biodegradable and created from renewable resources.