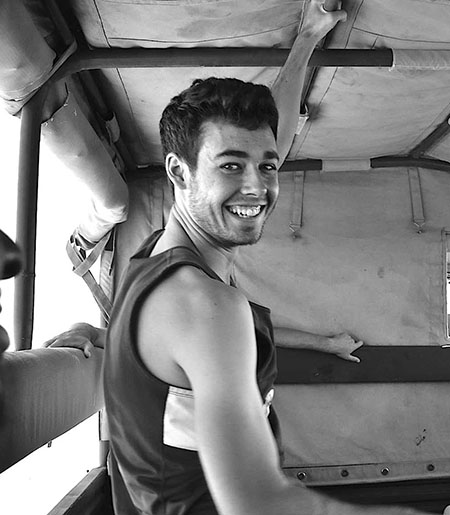 “CentriSeed was founded when the Stony Brook chapter of Engineers Without Borders made the decision to transition to an independent organization on campus to increase student opportunities,” said Brent.

Brent and his fellow CentriSeed innovators, Joseph Kocaj and Julian Kingston, recruited dozens of new members and completed two on-campus projects on their way to winning the Stony Brook Student Life Awards’ Best New Organization their first year in existence (2016). CentriSeed continued its successful path by being named Most Outstanding Organization (out of nearly 400 on campus) in its second year, completing two more projects along the way.

“I was able to learn how Engineers Without Borders functioned and how inexperienced chapters such as Stony Brook’s could get outbid by chapters with more experience,” said Brent. “That knowledge helped shape how CentriSeed could operate by empowering and guiding students in the local chapter in producing and completing their own projects.”

CentriSeed recently entered into formal and informal partnerships with iCreate, a faculty-run organization dedicated to fostering innovation, with the College of Engineering and Applied Sciences, and with the Global Innovation study abroad program, which Brent attended in Kenya.

“Our mission is to be a facilitator of professional skills development through innovative sustainable improvement projects spanning from our campus to developing countries,” said Brent, who met with world-renowned anthropologist Richard Leakey and his grand niece Acacia, who originated the idea for the Kenya program and served as its liaison.

As part of the College of Engineering and Applied Sciences Global Innovation Field School Brent and nine other students, a teaching assistant and instructor Rodrigo Peña-Lang traveled to the Turkana Basin Institute in Kenya to assist the Dassanech tribe. There, they helped remove fluoride from the water supply, began the process of redesigning healthcare facilities, remodeled a dormitory into a school building, helped develop an education system for the nomadic population and organized trash collection events.

“This is my favorite way to help, and the purest way,” said Brent. “We offered support for things they needed help to accomplish by demonstrating a genuine desire to achieve what’s best for them.”

Back on campus, Brent found more ways to innovate. When a fellow student reported an algae problem at Roth Pond, he and his colleagues planted 10 garden beds and a floating island as ways to remediate the algae crisis. However, they struggled to find materials available for commercial use that could survive the harsh winter weather and not harm the environment. They finally settled upon cork as the main material for the floating island with the plants growing in rock wool.

“The design still needs to be proven over time,” said Brent, who is an enthusiastic proponent of the law recently enacted in Suffolk County that requires stores to charge customers a fee of 5 cents on carryout bags.

“Plastic packaging is a frustrating problem,” he adds. “I think the biggest difficulty lies not in technology or economics but in culture. On Long Island I’ve seen very little concern for the environment, so I think somehow that culture needs to shift. Stony Brook can continue to use its reputation as a green campus to its advantage. It makes students feel as if they’re included in something exceptional by participating in this culture shift and encouraging changes in lifestyle.” (Related: Stony Brook to Participate in “Strawless Suffolk” Initiative)

“My perspective on the world was largely shaped by my parents who stressed having a positive impact on others,” said Brent. “Although I grew up volunteering, it’s not as if I am this wonderful human being who wants to give everything I have to save others. At some point, I realized that most everything I have is through exploitation of others, such as Africa by Europe. So I feel I at least owe it to others to help where it is needed and wanted and that I am not entitled to things just because of where I was born. I also love to solve problems and this provides an outlet for that,” he added.

“Engineering is a profession that works closely with individuals and communities to build technologies that improve their lives and students like Brent personify this,” said Robert Kukta, Senior Associate Dean for Education and Innovation in the College of Engineering and Applied Sciences. “Initiatives like CentriSeed and our Global Innovation Field School illustrate the guiding role of engineering in our technology-driven society, and the importance of engaging everyone–with a diversity of passions and experiences–to steer us in the right direction.”