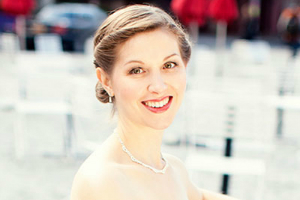 You might say that Wales-born Rachel Schutz has made a science of music.

A soprano, Schutz ’07 earned her bachelor of arts degree at Stony Brook as a double major in biology and music, then went on to earn a master’s degree in voice at the Bard College Conservatory of Music in 2009.

She then added a master of arts degree in linguistics at the University of Hawaii in 2012 before returning to Stony Brook to pursue a DMA in voice. She completed her first year here last May.

Rachel has been performing on stage since she was three years old, when she was asked to sing a solo in a pre-school Christmas show. At 12, she was cast in her first professional opera, John Hardy’s The Roswell Incident, with a touring company called Music Theatre Wales.

“My mom is a musician, so I grew up with classical music all around me, and I also played piano, harp and cello, so being a musician was always part of my identity,” she said.

On July 9, Rachel took first place at the 44th National Association of Teachers (NATS) of Singing Artist Awards competition at the Chicago Marriott Downtown Magnificent Mile hotel. She won $5,000, a New York solo debut in a major choral work with an orchestra and chorus, a $4,000 scholarship to attend the American Institute of Musical Studies in Austria, a $1,000 gift certificate from music publishing company Hal Leonard Corporation, and a solo recital at the next NATS competition.

Rachel said she chose Stony Brook on the advice of a singer friend of her father’s who told her that finding the right teacher was critical as a music major. After looking at all the major U.S. conservatories and narrowing her choices down to Guildhall School of Music and Drama in London or Stony Brook, she chose the latter because of acclaimed voice teacher Elaine Bonazzi.

Under Bonazzi’s tutelage Rachel participated in a number of graduate-level performances, including opera workshops, baroque ensembles and the Contemporary Chamber Players.

In her junior year, Rachel got the chance to perform her dream operatic role as Susanna in Mozart’s Le Nozze di Figaro.

“Stony Brook wound up being the perfect fit for me because as a university rather than a conservatory, it allowed me the opportunity to take classes outside my field, such as atmospheric sciences, political science and Eastern religion, and design my own degree,” said Rachel. “I knew I would need different skills for my chosen profession so I took six semesters of French and Italian, a few semesters in linguistics, and theater and poetry classes. The diversity of educational opportunities both within and outside the music department was exactly what I wanted.”

Rachel’s father, a former director of the Max Planck Institute for Gravitational Physics, also had a profound impact upon her.

“My dad is an excellent and patient teacher and knows how to simplify complex theoretical physics for lay-people like me, so I certainly think that I adapted his style and applied it to my own teaching in voice,” Rachel said. “Both my mom and dad have a huge passion and love for their chosen fields and showed me that one can feel that way about one’s work. They also both instilled in me a very strong work ethic.”

Although Rachel is a musician, she considers herself a scientist at heart.

“I chose not to pursue my interest in biology because I wouldn’t have enough time to practice singing and be serious about a career in music.”

But Rachel takes a scientific approach to her singing. “Learning to sing in a classical way requires real attention to detail, patience and systematicity, and I think that my comfort with that approach comes from the scientific half of me,” she said.

Stony Brook is also the place where Rachel met her future husband, pianist Jonathan Korth. Following their wedding in Cardiff, Wales while Rachel finished her master’s at Bard College, Jonathan accepted an offer to teach at the University of Hawaii. Rachel joined him and while he taught piano she became a voice instructor.

Rachel chose to return to Stony Brook to pursue her doctorate in musical arts because the degree was performance-based and she could tailor it to suit her interests.

“I knew that I wanted a place that was supportive, open and welcoming rather than overtly competitive,” she said.

Stony Brook’s proximity to New York City also afforded Rachel the opportunity to participate in the NATS Artist Awards competition this past March, when she won the Eastern Region competition and qualified for the final two rounds in Chicago this past July.

The day of her performance took on all the drama of an opera when she stepped into a pothole, twisted her ankle and nearly fainted in the middle of the street.

“Luckily my husband was there to catch me,” she said, and in spite of the trauma performed well enough to qualify for the second round the next day when she earned multiple prizes.

Stony Brook awarded Rachel the Distinguished Travel Award to help pay for her attendance at the competition.

By her own admission, classical singing is a difficult business. “The rejection, travel and business aspects of the performance career can wear on you,” she said.

But it does afford her the opportunity to travel and perform various genres and styles of music with a diverse group of people.

“So I am very content to be on the path I am on, combining performance with teaching, and the DMA offers me the prospect of turning to teaching full time down the road if I so choose.”

The Stony Brook community will have a chance to see Rachel perform Gyorgy Ligeti’s madcap Mysteries of the Macabre with the Stony Brook Symphony Orchestra under the direction of Eduardo Leandro on Saturday, October 29, 8 pm at the Staller Center Main Stage.

Described at the time as a facility “designed to meet the cultural, recreational and social needs of students,” the then-new Stony Brook Union, which opened its doors in January 1970, would take over social functions...

Stony Brook alum Flannery Cunningham ’18 and PhD student Niloufar Nourbakhsh are highlighted in a Washington Post article, “21 for ’21: Composers and performers who sound like tomorrow.” Both studied with...