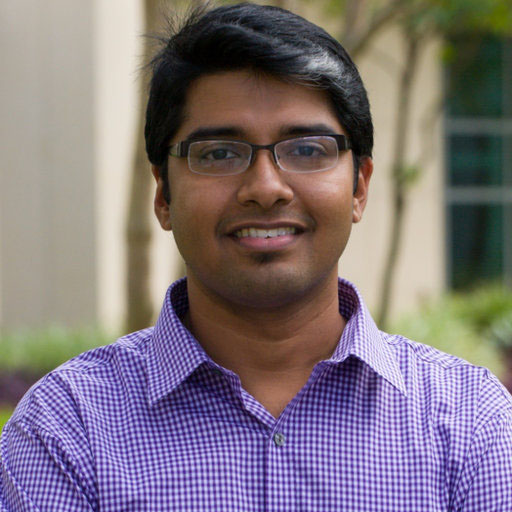 “What is climate?” Over the past several months, 5th and 6th graders from around the world have asked scientists for a user-friendly answer.

More than 100 submissions poured in for consideration by hundreds of 11-year-old judges in the 2018 Flame Challenge. In the end they chose Stony Brook’s own Soumyadeep “Deep” Mukherjee as a winner.

Mukherjee was honored in the “Writing” category for this year’s Flame Challenge, sponsored by the Alan Alda Center for Communicating Science at Stony Brook University. Founded in 2012 by Emmy award-winning actor and science enthusiast Alan Alda, the contest invites scientists of all backgrounds to explain complex topics to kids in ways that are innovative, entertaining, and easy to understand.

“I hear from scientists that those who are good at communicating about their own science are much better able to have attention paid to their work by other scientists, by funders, by policymakers,” Alda explained. “If you only communicate in the jargon of your field, you’ll never be able to collaborate with people in other fields that might help you discover something entirely new. It begins with your students and with your colleagues.”

This is the first time a Stony Brook scientist has won the challenge.

Mukherjee, a postdoctoral researcher for Stony Brook’s Program in Public Health, has worked hard over the past several years to hone his science communication skills. He recently participated in one of the Alda Center’s Improvisation for Scientists workshops, an experience that blends theatrical techniques with public speaking, audience engagement and message branding.

For his winning entry, Mukherjee talked about what it might be like to leave snowy New York for balmy Miami on a family vacation.

“Weather and climate are like close relatives. They have some similarities, but they are different!

Climate tells us how a place ‘feels’ over a long time. Climate depends on where a place is located. If you go to the North Pole, it will be freezing cold even in the month of May! Science uses different names to describe different kinds of climate. The hot (and sometimes wet) climate in Miami is called ‘tropical climate,’ the climate at North Pole is ‘Arctic climate.’ New York City is usually colder than Miami, but warmer than the North Pole. It is sometimes called ‘temperate climate,’” he wrote.

“Initially I was a little intimidated by [the Flame Challenge] because I don’t know any 11-year-olds, and I didn’t grow up as one here in the United States,” Mukherjee said. “But then I learned not to underestimate them. They are excited to learn and there’s so much you can teach them. If I can connect to an 11-year-old, I can connect to anyone.”

Mukherjee will receive a $1,000 cash prize for his entry. On June 3, he will attend the World Science Festival in New York City, where he will participate in a climate presentation and meet Alan Alda.