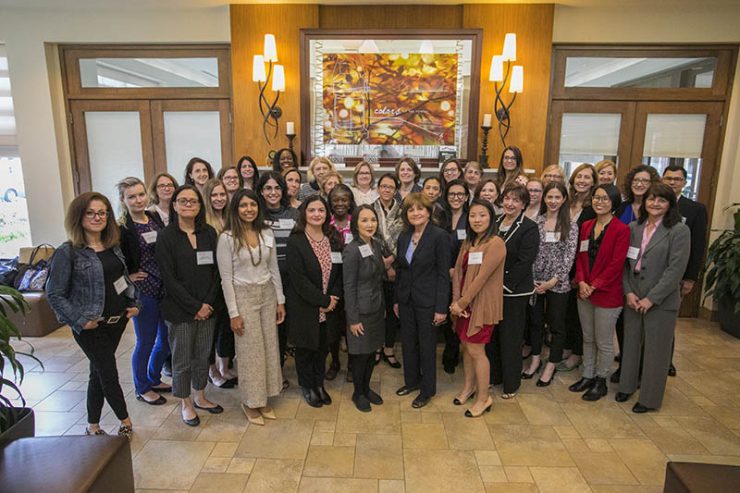 Before she started her first corporate job, Anna Goldberg ’09, ’12 said she didn’t recall experiencing gender bias. All that changed when at age 24 she participated in a meeting with predominantly male co-workers and realized she wasn’t being taken seriously.

“We were talking about a project that wasn’t working out and when I suggested a solution they just brushed it off. Then a man suggested the same thing and was told it was a good idea,” said Goldberg, who has a bachelor’s in chemical engineering and a master’s in chemistry, both from Stony Brook University. “Another time I proposed a new chemical to look at and the manager wouldn’t even allow me to do one test to see if I was right. It was depressing because I was so young and energetic and creative, and I couldn’t believe that they could squash someone’s will to do good work so easily for no reason.”

Goldberg left that job soon after for Brookhaven National Laboratory (BNL), where she is a radiochemist making isotopes for medical and research use (Stony Brook University is part of the management team of BNL – a national laboratory of the U.S. Department of Energy). Goldberg said she has since learned from her peers that her experience was typical for women in the science, technology, engineering and math (STEM) fields.

That there are unique challenges and barriers women face that can hamper their acceleration in leadership within STEM organizations was not a surprise to Patricia Malone, executive director of the University’s Center for Corporate Education (CCE). She spent more than two years developing the inaugural Women in STEM Leadership Program held in May, the first known corporate leadership program to focus specifically on women in STEM.

“We assessed what programming would make sense coming out of Stony Brook, which is known for being a driving force in STEM,” Malone said. “We saw there was a space in the market for women with substantive experience in the STEM environment to participate in a leadership program to help both their organizations and themselves as individuals move the needle forward in terms of their leadership opportunities.”

Malone said the goal of the program is to embolden participants to enhance critical and strategic thinking skills, develop political savvy and cultivate their own individual leadership brands. The interactive workshops addressed negotiating, conflict management and dealing with gender bias, and provided crucial networking and mentorship opportunities.

The first cohort to participate, 24 women who have each been in STEM fields for at least seven years, was hosted by the University May 8 to 11 at the Hilton Garden Inn on the Stony Brook campus. They came from local companies that are CCE corporate clients, including BNL, Cold Spring Harbor Laboratory, National Grid, Luitpold Pharmaceuticals Inc., P.W. Grosser Consulting and Leviton Manufacturing Co. Inc. Among the speakers were SBU’s Jonelle Bradshaw de Hernandez, senior director of Corporate and Foundation Relations, and Melissa Woo, senior vice president for Information Technology and chief information officer. The keynote speaker was Jennifer P. Howland, executive of the pathways program for experienced, diverse technical talent at IBM.

“What made this different than other leadership programs was that the conversations were guided by women in heavy STEM environments,” Malone said. “The chance to meet and hear from other scientists and engineers about their experiences and how they navigate their careers had a powerful impact on the participants.”

Among those participants was Goldberg, who is now establishing mentoring opportunities at BNL. “The strategies we learned are practical and simple to implement. But getting into new habits takes a while, so I’m trying to be mindful of that.”

Kristin Rubino, a senior hydrogeologist at P.W. Grosser Consulting, is one of the participants using her experience to help support her female colleagues. She reported that she left the program “energized and excited,” and, at the request of senior management, has since set up a presentation for women in her company.

“Being in a room with these intelligent women and hearing that a lot of them have the same issues was helpful because you learn you’re not the only one who feels this way,” she said. “It gives you the strength that you can do this.”

For the corporate leaders who sent staff, many of whom are on Malone’s advisory board, the program reflects their growing awareness of the need to focus on diversity in leadership.

“We want to make sure we have a pipeline of successes steeped in leadership interested in STEM, and the obvious solution is to improve the industry’s diversity,” Daly said. “We need to develop future leaders since we have an aging workforce and the way we serve customers is changing dramatically, as is the world of energy. Programs like the one at Stony Brook only benefit these goals.”

Malone said the Women in STEM Leadership Program was just the first step. CCE is hosting a series of topically focused workshops and seminars for women in addition to running the leadership cohort. In November, there will be an executive breakfast to recap the program, followed by a half-day workshop led by nationally known certified executive coach Bonnie Marcus. She will also be participating in the second cohort, which will take place April 2019.