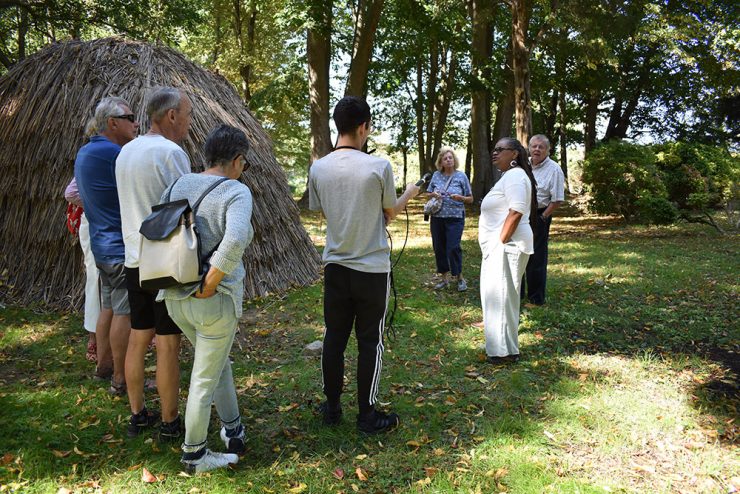 A team of students from Stony Brook’s School of Communication and Journalism (SoCJ) were awarded a national Edward R. Murrow Award for Excellence in Audio Feature Reporting – Student Work for their series, “Slavery on Long Island: The History That We Forget to Remember.”

“These students told a series of important and long-forgotten stories that matter to people and communities across Long Island,” said Laura Lindenfeld, dean of the SoCJ and executive director of the Alan Alda Center for Communicating Science. “I’m so proud of them and delighted that their effort has been recognized at the national level.”

This is the latest award for the project; it previously received a Best Historical Feature award from the Fair Media Council and a Hearst Journalism Award.

“These extraordinary students worked hard and produced a multimedia package that has opened a window into a neglected history while breaking new ground for future journalism enterprise projects,” said Zack Dowdy, a journalism instructor who co-taught the course.

Inspired by the New York Times’ “1619 Project,” students in the Fall 2019 advanced reporting class asked to explore the legacy of slavery more locally. Karen Masterson, the professor of the course, decided to let them try, helping them navigate primary sources and historical documents to find stories, and then tease them out into stories that were accurate and compelling.

“We threw our students in over their heads to dig up details about slavery on Long Island and they did it,” said Masterson, who is now an assistant professor of journalism at the University of Richmond. “They tracked down bits and pieces of the past from archivists, librarians, historians, descendants of the enslaved, and put it all together into great stories. I’m so proud of them.”

The 17 students in the class collaborated to produce stories about the lasting legacy of slavery and the descendants of enslaved people. Many of the students added multimedia elements — photography, video and audio — to their written pieces. Some of the best stories were published in 2020 by Newsday, Long Island’s only daily newspaper, and WSHU, a local NPR station. The four WSHU pieces received the National Murrow Award.

The Murrow Awards are given by the Radio Television Digital News Association to honor outstanding achievements in broadcast and digital journalism that meet high ethical standards at the national and local levels. They are among the most prestigious journalism awards in the country; only one reporting project per category receives an award. Arizona State, Syracuse University, University of Florida, University of North Carolina and Brigham Young University also received national awards for student reporting.

“This is a big deal; it’s a major award for the School and the station,” said journalism instructor and WSHU news director Terry Sheridan, who co-taught the course and edited the stories. He also guided the students in producing their pieces. “While this is in the student category, the category recognizes projects that aired on professional radio and TV stations. Only seven other projects across the country were honored.

“I’ve contributed to several national Murrows in my career, but this is special. I’m really proud of the students. The work they did on this project was of a caliber that I don’t think they thought was possible.”