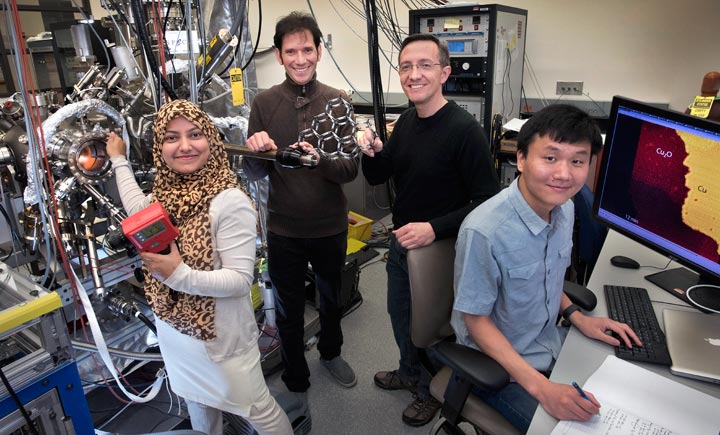 As part of her research, Nusnin Akter is developing chemicals to speed up the reduction of nitric oxide emissions from diesel engines. But she also teaches and volunteers in the community with the hope diversifying the STEM (science, technology, engineering, and mathematics) fields.

“I want other women and underrepresented minorities to get involved in research and for them to realize that they are not alone and can succeed in STEM fields,” said Akter, who is pursuing a doctoral degree in materials science and engineering at Stony Brook University and performing research at the Center for Functional Nanomaterials (CFN) at Brookhaven National Laboratory.

While working with her faculty mentor, Professor Taejin Kim from the Department of Materials Science and Engineering at Stony Brook, Akter was given the chance to work part-time at Brookhaven Lab through the Stony Brook University/Brookhaven Lab Seed Grant program, which sponsors joint initiatives between scientists at the two institutions. Her project has been to synthesize and characterize two-dimensional (2D) zeolite (a three-dimensional [3D] porous material) catalyst model systems for diesel engine converters.

Three days a week, Akter is at Brookhaven performing research in the Interface Science and Catalysis Group under the advisement of staff scientist Anibal Boscoboinik and group leader Dario Stacchiola. To study the chemical reactions catalyzed by these zeolite catalysts, she uses a simple 2D model system pioneered by Boscoboinik and colleagues that allows her to expose the zeolite catalysts on a molecular surface.

“With this system, I can follow the same processes that are happening in 3D inside the pores but with atomic resolution,” said Akter, who characterizes and studies the reactivity of the surfaces by using a combination of spectroscopy techniques at the CFN and the National Synchrotron Light Source II, also at Brookhaven Lab. “Dr. Boscoboinik and Dr. Stacchiola are always willing to help me through any problems I encounter during the project, and their encouragement has been instrumental to my professional development.”

For her research on nitrogen oxide–reducing catalysts for diesel engine exhausts, Akter won the first-place poster award at the “Girl Power in STEM: Step It Up!” symposium held at Stony Brook in March. Read more about that here.

“As a young woman engineer, I believe that if we don’t involve huge segments of society, especially women, in research, we lose out on potential progress. This award and similar outreach efforts can encourage women, increasing their participation in STEM,” said Akter. This spring, Akter is teaching the “Women in the Laboratory: Introduction to Science, Engineering, and Mathematics Research” course offered to freshmen WISE (Women in Science and Engineering) students.

Within her local community, Akter serves as a judge for middle- and high-school science competitions. She is also involved in the broader research community, belonging to several professional societies, regularly presenting her work on catalysis, and attending events that bring academia and industry together. At the Catalysis Society of Metropolitan New York’s 2016 Spring Symposium, she received the second-place poster award for her research on copper-based catalysts for reducing nitrogen oxides with ammonia.

Starting July 2016, Akter will be a full-time student in the Interface Science and Catalysis Group.

“I am dedicated to a career in research and to becoming a role model for women and underrepresented minorities,” said Akter. “The opportunities at Stony Brook and Brookhaven will catalyze my progress in achieving these goals.”