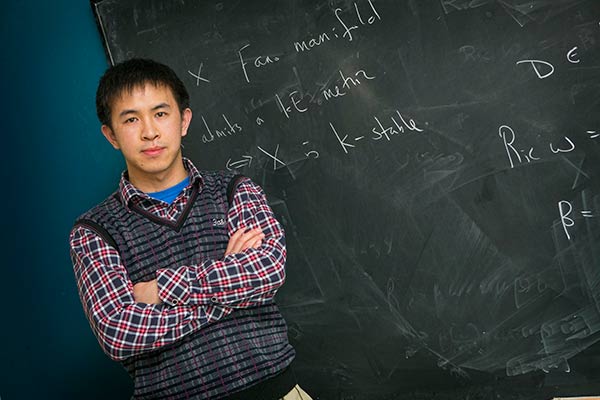 STONY BROOK, NY, February 18, 2014 – Song Sun, PhD, an Assistant Professor in the Department of Mathematics at Stony Brook University, has been selected to receive a Sloan Research Fellowship from the Alfred P. Sloan Foundation. He is one of 126 awardees from 61 colleges and universities in the United States and Canada chosen for this prestigious honor, which comes with a $50,000 two-year fellowship.

Professor Sun was selected based upon his work on Kähler geometry, in particular, on the interaction between Kähler-Einstein metrics in differential geometry and degenerations and moduli spaces in algebraic geometry. The Sloan Foundation recognizes Sloan Fellows as “rising stars” and the “next generation of scientific leaders.” He joins the ranks of 64 other Sloan Research Fellows from Stony Brook University that have received this honor before him.

“It is a great honor for me to be awarded a Sloan research fellowship,” said Sun. “It will help me make more collaborations and lead to further contributions in this field of mathematics.”

“I congratulate Dr. Sun on receiving this prestigious fellowship, which is a testament to his being an early-career scientist and scholar of outstanding promise,” said Dennis N. Assanis, Provost of Stony Brook University.

“The award of a Sloan Fellowship to Song Sun is wonderful news,” said Sir Simon Donaldson, Permanent Member, Simons Center for Geometry & Physics, and Professor, Mathematics Department. “Song is a superb mathematician, of outstanding range and power. He has already achieved a huge amount in his research and we can be sure that there is much more to come. He richly deserves this prestigious award.”

“This is an exciting news,” said Xiuxiong Chen, Sun’s former advisor and Professor of Mathematics, Department of Mathematics, Stony Brook University. “Sun is a wonderfully talented, young mathematician and has displayed a remarkable maturity and great technical power in his work.  I believe his future will be very bright and I expect only the very best from him. “

“For more than half a century, the Sloan Foundation has been proud to honor the best young scientific minds and support them during a crucial phase of their careers when early funding and recognition can really make a difference,” said Dr. Paul L. Joskow, President of the Alfred P. Sloan Foundation. “These researchers are pushing the boundaries of scientific knowledge in unprecedented ways.”

Fellowships are awarded in eight scientific fields – chemistry, computer science, economics, mathematics, evolutionary and computational molecular biology, neuroscience, ocean sciences and physics. Since the program’s inception in 1955, the Sloan Foundation has awarded nearly $120 million in support of more than 4,200 early-career researchers. Administered and funded by the Sloan Foundation, the fellowships are awarded in close cooperation with the scientific community. To qualify, candidates must first be nominated by their peers, and are subsequently selected by an independent panel of senior scholars.

Sloan Fellows may use their grants to pursue whatever lines of inquiry are of most interest to them, and they are permitted to use fellowship funds in a variety of ways to further their research including for such purposes as equipment, technical assistance, professional travel, trainee support and any other activity directly related to the Fellow’s research. Funds are awarded directly to the Fellow’s institution.

Prof. Sun joined Stony Brook University in 2013. He received his PhD in Mathematics from the University of Wisconsin in 2010 and his BS in Mathematics from the University of Science and Technology of China in 2006.  Before joining Stony Brook he was a research associate at Imperial College London. His research interests include differential geometry and algebraic geometry, more specifically, extremal Kähler metrics and relations to algebraic geometry; quantization and geometry of the space of Kähler metrics; and the study of geometric structures by evolution equations.