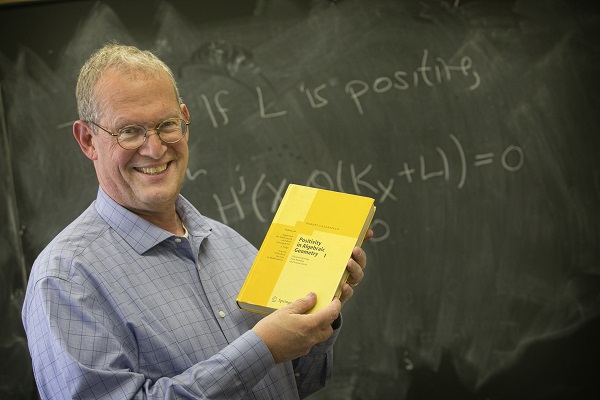 STONY BROOK, NY,
November 20, 2014 — Robert Lazarsfeld, PhD, professor of Mathematics specializing in Algebraic Geometry at Stony Brook University will be awarded the 2015 AMS Leroy P. Steele Prize for Mathematical Exposition at the Joint Mathematics Meetings in January in San Antonio, Texas. He is honored for his two-volume work Positivity in Algebraic Geometry I and II (Springer, 2004). The prize citation notes that these books were “instant classics” that have profoundly influenced and shaped research in algebraic geometry over the past decade. Algebraic geometry, a major branch of modern mathematics with connections to many other areas of mathematics and also to physics, investigates the geometric properties of solutions to polynomial equations.

The prize-winning books of Lazarsfeld are now used for courses and seminars all over the world.

“They can be used both as textbooks and as sources for current research problems, and so have great value for both students and experts in the field,” the prize citation says. “They are exceptionally well written, with numerous examples, new proofs, and especially new results reflecting Lazarsfeld’s great taste and originality.”

“I’m delighted to receive this award,” said Prof. Lazarsfeld. “Stony Brook has an outstanding mathematics department, and it’s a great honor to be part of it. I’m particularly excited to have joined the fabulous group of algebraic geometers here.”

“On behalf of Stony Brook University, I congratulate Rob Lazarsfeld on his Steele Prize for exposition; it is a very high honor,” said Samuel L. Stanley Jr., M.D., President of Stony Brook University. “The citation, noting that his two-volume works, published just within the past ten years, were ‘instant classics’ is a great reflection of his teaching and his outstanding scholarship.”

Lazarsfeld is known as one of the top world experts in algebraic geometry. After receiving his doctorate at Brown University in 1980, he held positions at UCLA and at the University of Michigan, where he was the Raymond Wilder Collegiate Professor (Wilder was President of the AMS in 1955-56).  In 2013, Lazarsfeld moved to Stony Brook University.  In addition to his outstanding scholarship, he has guided over 20 PhD students, many of whom have gone on to stellar careers in their own right.  Lazarsfeld has served as editor for some of the top mathematics journals, including serving as an editor and then as managing editor of the Journal of the AMS.  He currently serves on the Board of Trustees of the AMS.

“Stony Brook University was honored to welcome Robert Lazarsfeld to our faculty last year,” said Dennis N. Assanis, Provost and Senior Vice President for Academic Affairs at Stony Brook University. “This renowned mathematician, who is also a Sloan Fellow, a Guggenheim Fellow, and a member of the American Academy of Arts and Sciences, is well-deserving of this notable award for his influential research in algebraic geometry.”

Presented annually, the AMS Steele Prize is one of the highest distinctions in mathematics.  The prize will be awarded at the Joint Mathematics Meetings, Sunday, January 11, 2015 at 4:25 PM, at the Henry B. Gonzalez Convention Center in San Antonio, Texas.

(Information provided in a press release provided by the AMS.)