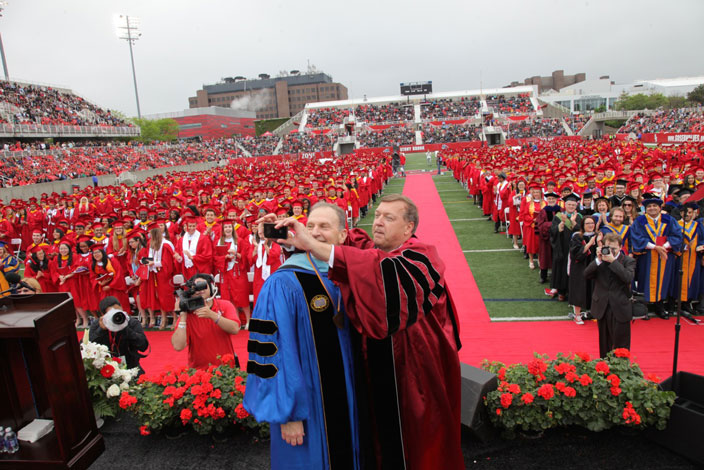 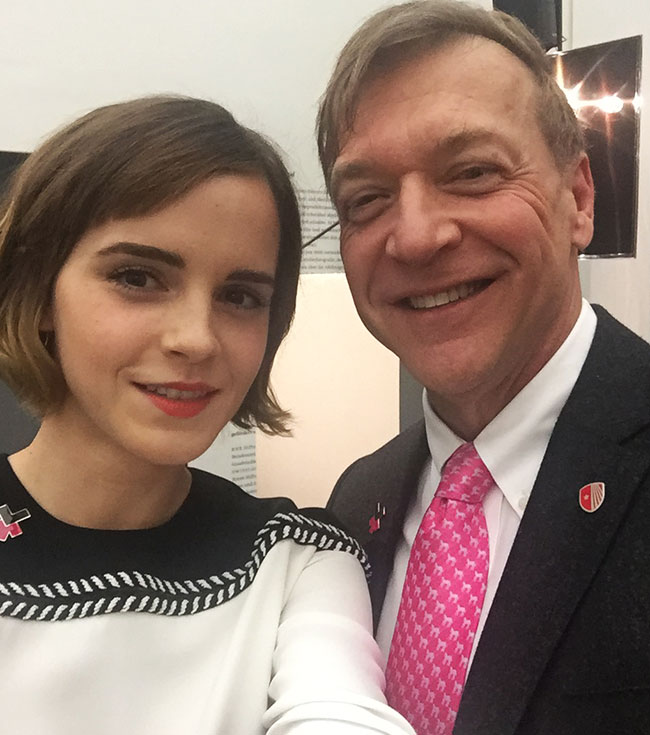 STONY BROOK, NY, May 23, 2014–At Stony Brook University’s fifty-fourth May commencement ceremony today at Kenneth P. LaValle Stadium, 5,916 students had their degrees conferred, as the class of 2014 became the University’s newest alumni. They joined more than 150,000 of their predecessors around the globe whose lives and work personify the Stony Brook
mission.

“…We care deeply about keeping Stony Brook University affordable and maintaining the diversity that characterizes our campus,” said President Stanley. “But it is important to emphasize that at Stony Brook when we talk about access, we talk about access to excellence. And when you look back at the quality of your education, the world class faculty, the research opportunities, the amazing laboratories and classrooms, and the vibrant student life, I hope you agree that Stony Brook University is an amazing value.

“We will work tirelessly to increase the value of your Stony Brook degree every year,” he continued, “improving the quality and reputation of this University, making your investment in Stony Brook, both of time and money, the best investment you ever made. I know I speak for every faculty and staff member at Stony Brook when I say we are committed to excellence, committed to seeing this young University achieve greatness.  You should expect nothing less.” 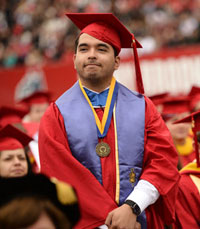 President Stanley went on to highlight the personal stories of three students: Neha Kinariwalla, SBU’s first Gates Scholar who will study at Cambridge University to earn her Master in Philosophy degree and who will return to Stony Brook to begin her medical school studies; Jean Claude Valasquez, who as a child immigrated to the United States from Columbia, and is graduating with a double major in Philosophy and Political Science with a 3.95 GPA and who will pursue a Masters in Health Care Management at Columbia University and subsequently Columbia Law School; and Monique Grant who graduates Magnum cum Laude with a double major in Political Science and History. Monique interned with the US Department of State, and this summer will be interning with the All Stars Project, helping develop young talent from underprivileged communities.

At the end of his remarks, President Stanley took a moment to recognize Jerrold Stein, Assistant Vice President for Student Affairs and Dean of Students, who earlier this year announced his retirement after 38 years at Stony Brook. Before he passed

Dean Stein the microphone, Dr. Stanley paused to take a selfie with the beloved Dr. Stein which was met with an enthusiastic round of applause. Stein, who coined the phrase, “What’s a Seawolf, I’m a Seawolf,” recalled some of his fonder memories while at Stony Brook including helping to foster a stronger sense of community among students, faculty, staff, alumni and the community.

“It was in the Fall of 2007, during Homecoming weekend, when I made a personal vow to a room filled with Alumni – a pledge to devote all my energy into creating unity at Stony Brook; to build a sense of community – to bridge the past with the present so we can build a better tomorrow,” said Stein. “I stated that I know my job will be done when I asked the question, ‘What’s a Seawolf,” that every student responds, “I am a Seawolf’. 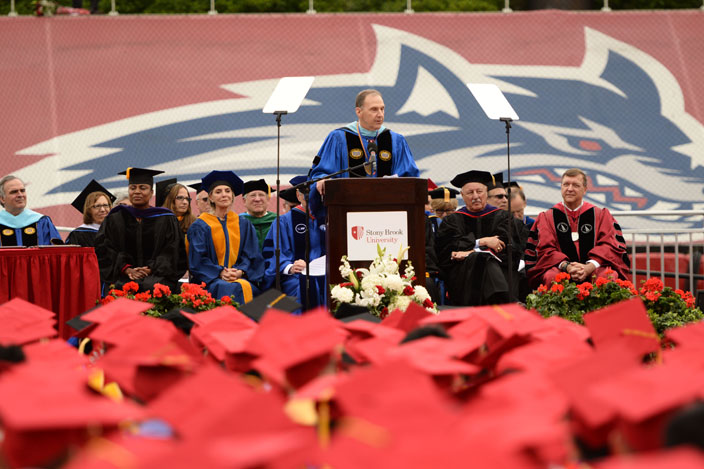 “We are Seawolves forever and we leave behind a kinder and a more vibrant community,” Stein continued. “Harriet Tubman once said, ‘Every dream begins with a dreamer.’ Thank you for making my dreams come true.” 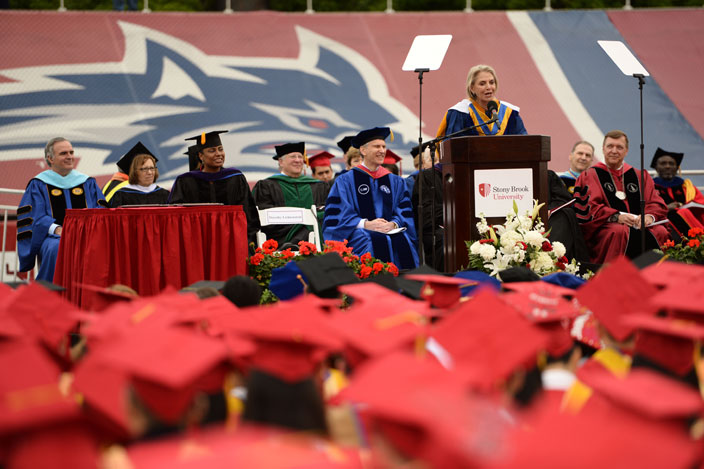 Stony Brook conferred two honorary degrees this year, to David Walt (Doctor of Science), the Robinson Professor of Chemistry and Biomedical Engineering at Tufts University, leader in the application of micro-and nano technologies and SBU alumnus; and, Dorothy Lichtenstein (Doctor of Humane Letters), President of the Roy Lichtenstein Foundation, a Trustee on the Stony Brook Foundation Board, and a Trustee of the Parrish Art Museum. 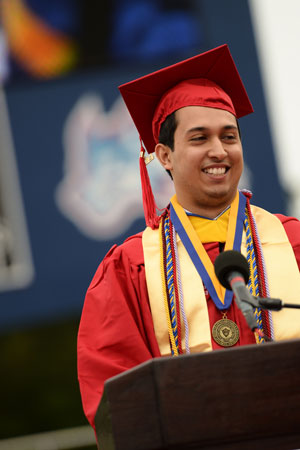 Provost Dennis N. Assanis announced the winner of the Ward Melville Valedictorian Award, the University’s most distinguished undergraduate honor named for the first chairperson of the Council of Stony Brook University. The Ward Melville Valedictorian Award goes to the graduating senior or seniors who have attained the most outstanding academic record during four years at Stony Brook. The students who received the award were four graduating seniors:

Provost Assanis also announced the winners for the H. Lee Dennison Valedictorian Award, named in honor of Suffolk County’s first chief executive and presented to the graduating senior or seniors who entered Stony Brook as a transfer student, completed at least 60 credits of letter-grade work at Stony Brook and attained the most outstanding academic record in that work. The students who received the award were three graduating seniors: Maureen E. Case, a Multidisciplinary Studies (Psychology, Philosophy and History) of East Setauket, NY; Michael Cronin, a History Major, Political Science Minor of Suffern, NY and Donggil Kim, an Applied Mathematics and Statistics and Business Management Double Major from South Korea.


The student speaker, Ali Syed, graduated with a double major in Biology and Sociology. Syed, a commuter student selected by a committee of staff and faculty from a pool of submitted speeches provided through the annual senior speaker competition, shared his thoughts about his four years as a Seawolf.

“We are the Seawolves,” said Syed. “It’s the students. The names. The stories. The faces. The experiences. Blending

all this to enrich this University. Some of you will create companies, 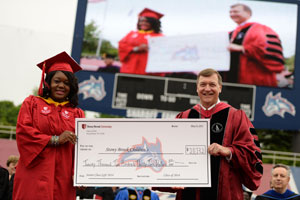 perform life-saving surgeries and become award-winning journalists. But just remember, we are the Seawolves who forged our own paths, rather than walking on the open ones. Let’s not stop that tradition.”

Finally, on behalf of the Class of 2014, Deborah Akinbowale (Health Sciences) presented President Stanley with the Senior Class Gift of $20,232 designated to support Stony Brook Children’s Hospital. It became the largest class gift in Stony Brook’s history when the original amount of $10,116 raised by the class of 2014 was matched by an anonymous donor. 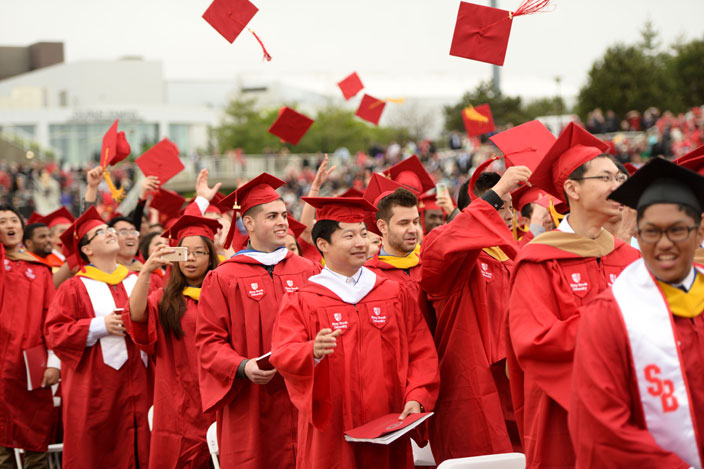