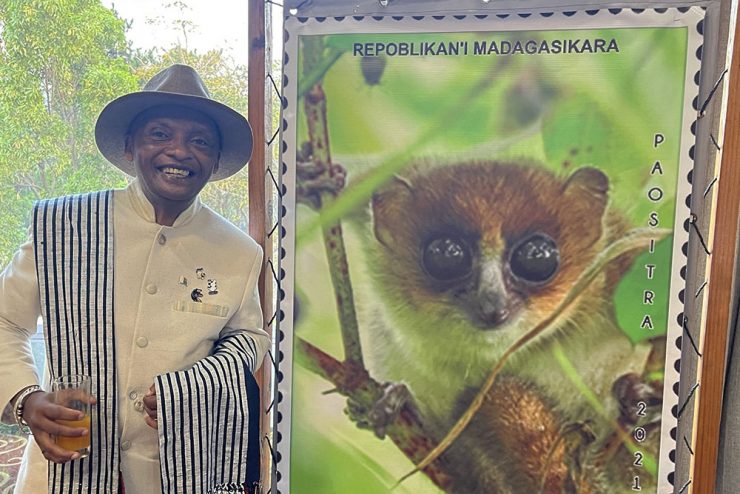 World Lemur Day is October 29, and it was celebrated in Madagascar with the issuance of six new lemur postage stamps, including two honoring Stony Brook University alumnus Jonah Ratsimbazafy.

Ratsimbazafy, a renowned primatologist and conservationist, earned his PhD in anthropological sciences from Stony Brook in 2002, and was a student of Patricia Wright, distinguished professor anthropology in the College of Arts and Sciences, executive director of the Institute for the Conservation of Tropical Environments and founder of  Centre Valbio, a modern research campus in the rainforest of Madagascar.

“I am so proud of all he has accomplished since he received his diploma almost twenty years ago,” Wright said of Ratsimbazafy, who was recently elected president of the International Primatological Society and to the Third World Academy of Science. “It was such an historic event to have lemurs honored with these six beautiful stamps, reminding the country and the world of these valued primate treasures.”

One of the six stamps is of Ratsimbazafy, and another is of the new mouse lemur Microcebus jonahi, a newfound species that is one of the tiniest primates in the world, named for Ratsimbazafy. The other stamps are of the black and white ruffed lemur (Varecia variegata), the silky sifaka (Propithecus candidus), the diademed sifaka (Propithecus diadema), the brown lemur (Eulemur fulvus).

World Lemur Day was officially celebrated at Parc Tsimbazaza, the Madagascar National Zoo, with a day full of activities, many for children.