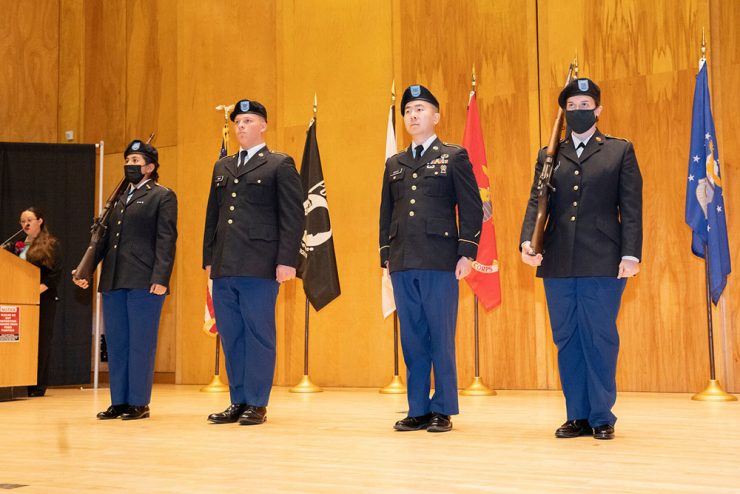 Stony Brook University hosted a Veterans Day ceremony November 10 in the Sidney Gelber Auditorium in the Student Activities Center, recognizing the sacrifices of all military personnel, and especially those of the Stony Brook community.

“Today we honor the service of all Americans who answered the call to serve,” she said. “Stony Brook University is grateful to have so many veterans who served their country.”

“It’s because of your service and sacrifice that our country is safe and free,” said Gatteau. “It’s a selfless act that comes with few guarantees. We are proud to have the student vets that interrupted their education to serve. Being here now shows your commitment to your education as well as your country.”

New York State Assemblyman Steve Englebright and Brookhaven Town Supervisor Ed Romaine each spoke briefly to thank the veterans for their service. Speaker Jose Arango ’21 followed, describing a journey that began in his native Colombia, eventually leading to America and the Army. Arango’s tour of duty included service in Afghanistan in 2015-16.

“Those years in the Army helped me mature into who I am today,” he said. “We all had a different origin, but we shared the Army green and values.”

Keynote speaker Ismael Rodriguez, Student Affairs’ senior business partner, financial operations and director of Military and Veterans Affairs, described how the military helped him after a difficult childhood in a tough neighborhood.

“I was 17 and running with the wrong crowd, and I realized I had to make a decision about what I wanted the rest of my life to be,” said Rodriguez, a United States Navy and Army combat veteran with eight years of service.

“The military taught me discipline, responsibility, family, and teamwork,” said Rodriguez. “It turned my life around.”

Rodriguez noted that when he came to Stony Brook there wasn’t a veteran’s office. “My transition was difficult, and I wanted to do something to make it easier for others. Today we have 250 veterans on campus and a dedicated office and staff. Veterans also get 100% of their tuition paid for in state schools.”

Rodriguez has provided his leadership and vision to increase veterans awareness on campus and ensure counseling and psychological services to veteran students, and has cultivated an effective ROTC program. He also spoke of the soon-to-to-be-opened Veterans Lounge in the SAC, something he described as a highlight of his 25 years at Stony Brook.

“I’m privileged to have witnessed the welcoming of vets, and I’m honored to have helped make the new Veteran’s Lounge happen,” he said. “It was 20 years in the making.”