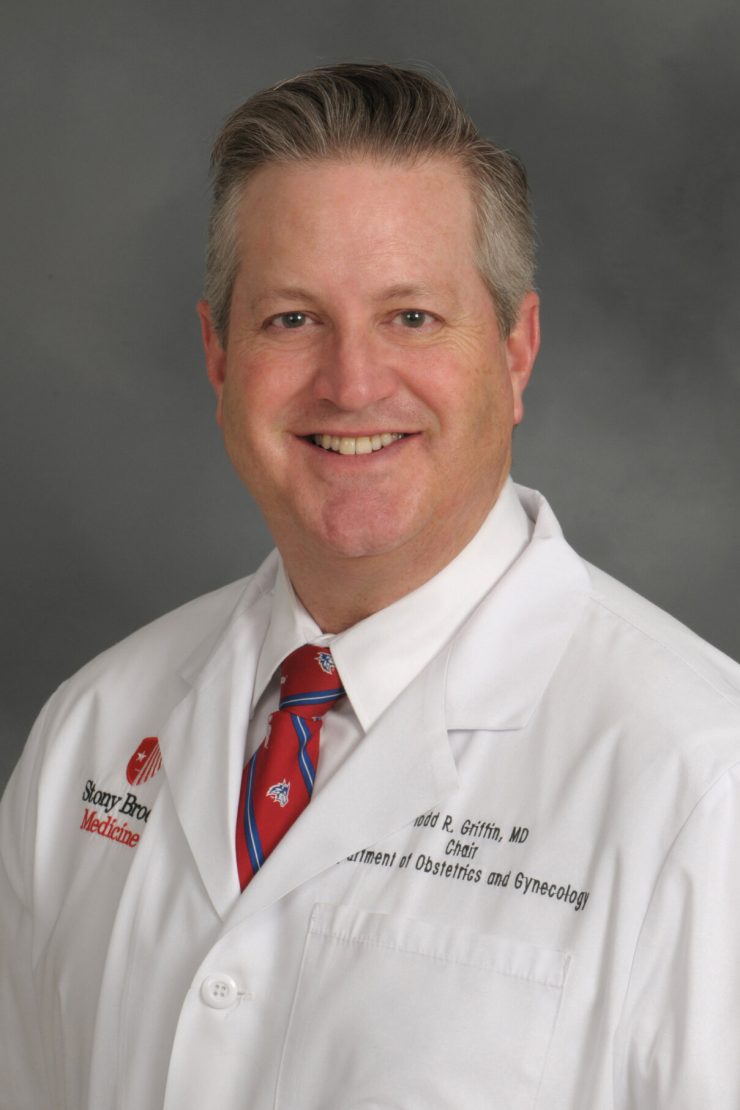 “I am delighted Dr. Griffin is continuing to grow his career with us and I look forward to working with him to foster community relationships and build a successful future for Stony Brook Medicine,” said Paz. “Dr. Griffin’s extensive knowledge of our organization and clinical expertise makes him poised for success in this role.”

In his new role, Griffin will have responsibility for clinical leadership across Stony Brook Medicine (SBM) and oversight of all ambulatory facilities. He will also provide oversight to the Clinically Integrated Network (CIN) across SBM faculty and Stony Brook Community Medicine (SBCM) physicians. He will serve as the clinical executive for all affiliates and partnering organizations and will develop plans for coordination of inpatient and outpatient care, promoting operational efficiency in the inpatient environment and seamless transition to the outpatient setting. Griffin will work with SBM leadership to develop and implement the vision and strategy to grow and maintain the success of the SBM clinical enterprise.

Griffin has served in the role of interim vice president for clinical services and vice dean for clinical affairs since June of this year. He is also professor and chair of the Department of Obstetrics, Gynecology and Reproductive Medicine. Griffin has spent most of his career at Stony Brook, having been a medical student, a resident and returning as a faculty member after completing his service in the U.S. Navy.

As a clinician, Griffin is a minimally invasive/robotic gynecologic surgeon who was instrumental in helping Stony Brook start a robotics program. As an educator, he has served as a clerkship director, residency program director and vice chair for education. In 2009, he was selected to serve as the chief medical officer (CMO) of Stony Brook University Hospital. In this role, he was responsible for improving patient safety, quality and operational efficiency of the clinical services. As CMO, he was part of the team that developed the plan to establish a health system through the acquisition of other hospitals and physician practices. In 2012, he was recruited to become Chair for OB/GYN to develop a strategic plan for growing the footprint of women’s health. He served both as chair of OB/GYN and CMO until 2014.

As chair, Griffin has had a number of significant accomplishments. He has grown the total revenue of the department from $12 million in 2012 to nearly $100 million expected in 2022. He expanded the faculty from 22 to more than 70 full-time faculty and developed three outpatient clinical sites. The research mission of the department has also grown significantly as demonstrated by total NIH funding, publications and scholarly output.

From 2018 to 2021, Griffin served as the Stony Brook University Hospital Medical Board President. In 2021, he was elected to serve as chair of clinical practice management plan. In 2022, he received the Chancellor’s Award for Excellence in Faculty Service.

When Griffin assumes his new role in 2023, he will step down as chair of the Department of Obstetrics, Gynecology and Reproductive Medicine. An interim chair will be appointed in the near future.