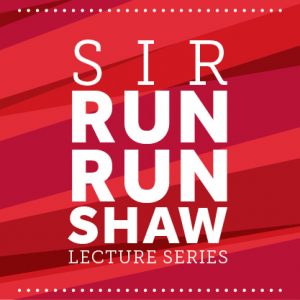 The College of Arts and Sciences is proud to present the Sir Run Run Shaw Lecture Series for 2022-23. The series kicks off on Wednesday, October 12, with the Department of Hispanic Languages and Literature’s presentation of “Sketches of Manners, Civil War and Liberal Reform in Nineteenth-Century Latin America,” featuring Felipe Martínez-Pinzón, Brown University.

The series continues on Wednesday, October 19, with “The War in Ukraine and the Future of Democracy” featuring Timothy Snyder, Yale University.

Sir Run Run Shaw was an entertainment mogul and philanthropist who, in the 1960s and 1970s, presided over East Asia’s largest movie studio and produced hundreds of popular movies. He was credited with establishing the kung-fu genre of martial-arts movies, and helped bring Chinese martial arts films to an international audience. A generous philanthropist, especially in the education sector, Shaw remained involved in Hong Kong’s media industry well into his later years, retiring as chairman of the television station TVB at the age of 104.

The Shaw Foundation Hong Kong Limited made a gift of HK$1 million to the College of Arts and Sciences through the stewardship of CN Yang, Einstein Professor of Physics, and President Marburger in 1985. This gift was used to establish the Sir Run Run Shaw Endowment, one of the earliest endowments established by the Stony Brook Foundation. The endowment proceeds support lectures in the College of Arts and Sciences.

Wednesday, October 19 at 4:30 pm
“The War in Ukraine and the Future of Democracy”
Featuring Timothy Snyder, Yale University
Humanities Building, Room 1006
Register by October 18
Co-sponsored by the Humanities Institute, the Center for Changing Systems of Power, and the Office of the Provost

Wednesday, November 9 at 5 pm
“Transfigured Sexualities and Reconfigured Productivities: Disquiet and Innovation in Imperial Songhay”
Featuring Michael A. Gomez, New York University
Presented by the Institute for Globalization Studies and the Department of History