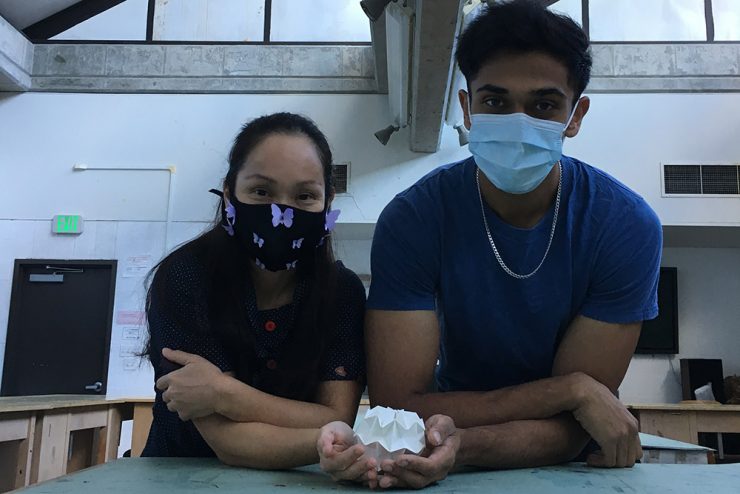 Milo Mohamed ‘24 has made it into the limelight. His artwork, that is.

Earlier this semester, Mohamed, a Studio Art major in the Department of Art, was assigned a project in Associate Professor Izumi Ashizawa’s ARS205 class to use a 2D medium to create a 3D sculpture. The result? A paper sculpture that was ultimately selected as a stage prop in this past October’s Letters of Suresh, a play by Rajiv Joseph that ran Off Broadway at the Tony Kiser Theater at Second Stage Theater in Manhattan.

The sequel to Animals Out of Paper, Letters of Suresh is about an origami genius named Suresh who creates amazing origami pieces. A critical prop in Letters is an origami miniature whale heart; the description of the play depicts the heart as a piece so intricate that Suresh has to use a laser braid to create the creases. Interestingly, playwright Joseph had no consideration of origami for the prop when writing the descriptions of the heart.

“The scene during which the prop was used is critical, and the fact that Milo’s work was showcased for that particular scene made me very proud of him,” Ashizawa said.

Origami has been a hobby of Mohamed’s since he was young, and has always enjoyed creating art and drawing. He recalls how he started practicing origami, starting with simple, beginner pieces to those that are more complicated and stunning. “It started as something simple and enjoyable; as the pieces I create become more complex, I get more invested in the process and the designs I am working on,” he said.

Mohamed’s “go to” is to make something geometric and 3D with depth, as opposed to stacking 2D pieces to give the illusion of a 3D object.

“For the project in Professor Ashisawa’s class, I wanted to make something that was properly 3D,” he said. “I remember one piece I created that was not only properly 3D, it was also modular — the shape of the piece could be modified. I figured that this could be the perfect chance to show the class an interactive aspect of art.”

At the time, Professor Ashizawa was working on Letters as a translator and language coach. The scenic designer for the show and friend of Ashizawa was searching for the perfect origami piece to resemble the whale heart. Ashizawa recalled seeing Mohamed’s work in class and thought it would be suitable for the show.

“When I saw Milo’s piece, I thought to myself, ‘This is perfect!” she said. “I showed Milo’s work to my friend without suggesting anything, and she thought that Milo’s work was wonderful, asking if there were any variations of Milo’s origami.”

Mohamed had to work on creating different sizes and variations of the prop, receiving notes from the design team and making precise adjustments, as well as maintaining that the piece was appropriate for the play. He made three models, two of which were derived from the same folding method of squashing the paper onto itself, collapsing it, known as the “magic ball.” The creation process for all pieces was similar, but the depth of detail, such as the number of folds and the appearance of creases, was the key to selecting the most suitable variation, Mohamed recalled. For example, a simpler version involved 128 folds, the more complex involved 256 folds. At last, the medium-size origami was chosen due to its applicability to be shown on stage to the audience.

“What Milo did involved a mixture of the complete precision seen in mathematics and science as well as the beauty and story-telling aspect of art,” Ashizawa said. “I really liked how a simple piece of paper can be transformed into such an intricate, yet, complex object.”

Mohamed was compensated for the creation and use of his artwork as a professional contribution, and also received special thanks in the Letters of Suresh playbill, cited as one of the origami artists.