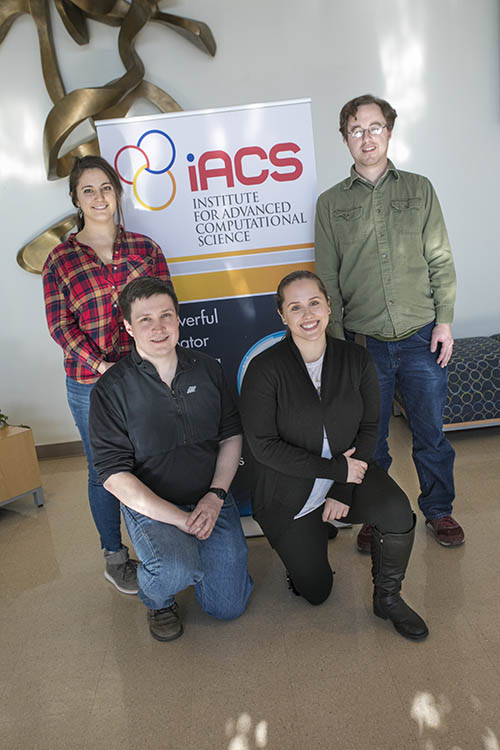 Understanding the complexities of high-impact science is tough. Communicating those complexities to policy-makers is even tougher.

At Stony Brook, STRIDE (Science Training and Research to Inform Decisions) aims to meet that challenge by providing STEM graduate students with the interdisciplinary skills they need to communicate their findings and make positive change.

Funded by a five-year, $3 million National Science Foundation grant and implemented by the Institute for Advanced Computational Science (IACS), STRIDE prepares the next generation of scientists to translate complex data-enabled research into informed decisions and sound policies.

Heather Lynch, associate professor of ecology and evolution at Stony Brook, was on the faculty team that wrote the original proposal for STRIDE, a three-year, three-proposal process.

“While we are a year into STRIDE, these training programs take far longer to bear fruit,” said Lynch. “I have high expectations for how STRIDE will benefit students. I just don’t have any hard and fast statistics to define programmatic success yet.”

The graduate students participating in STRIDE, however, all say they are already benefiting greatly from the program, which offers a scientific-writing week-long workshop, a mentoring workshop, monthly brown bag lectures, a “Many Paths to Science” panel and a conference, titled STRIDE-Con.

Joshua Comden, an applied mathematics and statistic major on the operations research track, is currently in his fifth year of the PhD program. He said that he found out about STRIDE through an email sent to all the graduate students in his department.

“I read the description and found it interesting but first thought I wouldn’t have time for that,” Comden said. “But a few days later my advisor, Professor Zhenhua Liu,  told me he thought I would be the perfect candidate. So I applied and won a fellowship for one year.”

Comden added that the biggest skill he has acquired from STRIDE is considering what his audience wants when he gives presentations. “I’ve shifted my internal focus from me to what they need,” he said.

“I’ve participated in all of the STRIDE events since August,” Comden said. “But my favorite was STRIDE-Con, where we had a famous presenter named Scott Berinato [a senior editor at Harvard Business Review]  talk about the art of making good charts.”

Tara Dolan, a third-year PhD student in Marine Sciences, said that she has participated in a wide array of the programs offered and that the mentoring workshop was her favorite. “I got to bond with the other STRIDE fellows and faculty, practice important skillsets in communication and problem-solving and get into some lively discussions about diversity and inclusivity, which are both important to me,” she said.

Lisa Herbert, a third-year PhD student at the School of Marine & Atmospheric Sciences (SoMAS), said that she has acquired a clearer picture of her professional future through her STRIDE fellowship.

“I have heard many honest discussions about the pros and cons of academia, industry, consulting, communication and other ways of being a scientist. In one seminar I learned that consulting can be done during or after an academic career rather than as a separate career,” Herbert said.

“I have learned how to explain my work to non-scientists and how scientists play a role in policy-making, which I think is really important when dealing with the current administration.” Herbert, who is studying the biogeochemistry of iron and other trace metals that serve as nutrients for biological growth in the Arctic Ocean, is involved in understanding and communicating how melting land ice could impact that region’s chemical and biological make-up.

Perhaps the student who has benefited the most so far from STRIDE is Xin Zhou, an international student in the US on an F1 visa. While he is ineligible for a fellowship, he has become a STRIDE trainee.

Zhou said he loves the fact that he has access to many mentors, each with a completely different perspective, within the multidisciplinary program.

A sixth-year PhD student in SoMAS, Zhou is researching extreme weather patterns such as those exhibited in his hometown in Yunnan Province in southeastern China.

Zhou has picked up skills in speaking, video-making, blogging and social media and has also completed a STRIDE summer internship at Brookhaven National Laboratory.

Taking a one-day visualization course, which he won through a STRIDE contest, has helped him to witness firsthand the gap between scientific research and policy.

“It seems that many people, including policymakers, are still denying climate change,” he said. “But as scientists we must ask ourselves if we have communicated climate science well enough in the first place. The skills I learned as a result of STRIDE will help me to present the facts to different audiences more effectively.”

STRIDE participants receive, upon completion of the program, an advanced graduate certificate. Jennifer McCauley, program coordinator for the training grant, said that “the skills they acquire should set them apart from their peers in their ability to communicate science more effectively.”

Although the STRIDE program is theoretically designed to be finished in two years, the participants can “take as long as they need to,” said McCauley.

“I would have loved to have had these kinds of experiences as a graduate student,” said Professor Lynch. “I particularly appreciate the brown bag lunches because we’ve had wonderful speakers from across the campus and across the country,” she said. “I want to reiterate that the events are open to everyone on campus and that they should drop by and take advantage of them.”

The 2018 STRIDE Fellowship applications are now available on the STRIDE website: http://www.stonybrook.edu/stride/opportunities/

The application deadline is February 1, 2018.

Questions can be directed to Jennifer McCauley, PhD, at jennifer.mccauley@stonybrook.edu.

Holiday Season Wishes, Holiday Season Support While the holidays represent different things for all of us, they are often a time for reflection and remembrance, gatherings with family and friends, caring, giving...