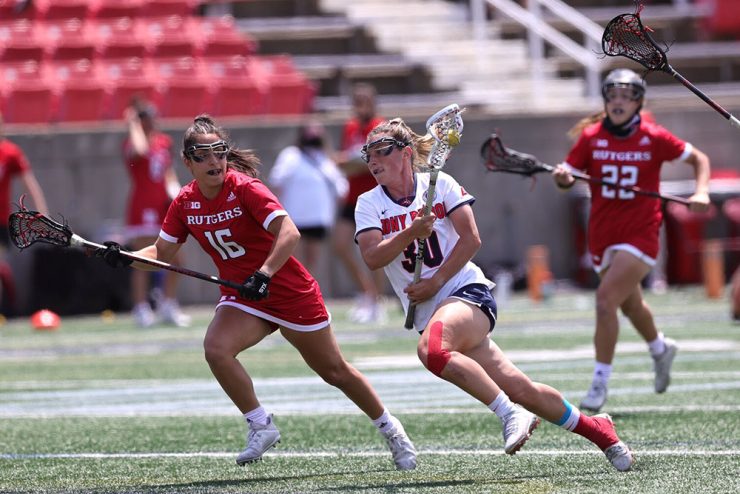 After two decades of excellence on and off the field in the America East Conference, Stony Brook University has accepted an invitation to join the Colonial Athletic Association (CAA) as a full-time member, elevating the university’s profile and enhancing the student-athlete experience.

Stony Brook President Maurie McInnis and Director of Athletics Shawn Heilbron made the announcement on Jan. 25. All 18 Stony Brook athletic programs will compete in the CAA, marking the first time in the university’s Division I era that every sport will be a member of the same conference.

“I’m very excited to announce that Stony Brook University will join the Colonial Athletic Association,” McInnis said. “This invitation is a historic step for our institution and a testament to our tremendous growth – both in academics and athletics – over the last two decades. Today would not be possible without the dedication of our student-athletes and coaches, who have paved the way for this moment. Our future is bright, and we look forward to competing for CAA Championships for years to come!”

Stony Brook’s football team has competed in the CAA since 2013. Decisions regarding scheduling formats and championship field sizes are ongoing and will be determined over the coming months.

“Today marks the start of an exciting new chapter in the history of Stony Brook Athletics as we announce our transition to the Colonial Athletic Association,” said Heilbron. “The decision to move to the CAA is synchronous with the aspirational nature of our university as well as our department’s vision to positively transform the life of each student-athlete. We took an extremely deliberate approach to this process and believe that the outcome encapsulates the best interests of our entire Stony Brook community.”

“We are pleased to welcome Hampton University, Monmouth University, and Stony Brook University as the newest members of the CAA,” said CAA Commissioner Joe D’Antonio. “All three institutions fit perfectly into the framework of the Conference’s vision that calls for our membership to work together to advance nationally competitive athletic programs – coupled with outstanding academic programs – that empower student-athletes as whole persons to strive at the highest level in every aspect of their lives.”

Stony Brook joined the America East Conference for the 2001-02 academic year following a two-year stint as an independent after ascending to the NCAA Division I level in 1999. Over its Division I history, Stony Brook has collected 38 regular season championships and 44 conference championships. The Seawolves were twice recognized as the strongest athletic program in the America East by claiming the Commissioner’s Cup in 2018-19 and 2020-21.

Over the course of the last two decades, Stony Brook has emerged on the national scene. In March 2012, Lucy Van Dalen became the Seawolves’ first NCAA individual national champion after winning the mile at the indoor track & field championship. In June 2012, the baseball team advanced to the College World Series for the first time in program history, knocking off LSU in the Super Regional.

The Seawolves’ women’s lacrosse team has become a national power, winning a conference record eight consecutive America East championships. In 2018, Stony Brook earned a No. 1 overall ranking in all major lacrosse polls for the majority of the season and has advanced to three NCAA Tournament quarterfinals since 2017.

Men’s lacrosse program has been a top-tier team in America East, wining three conference championships. In 2010, the Seawolves advanced to the NCAA quarterfinals for the first time in program history.

Academic excellence has always been at the forefront for the department. During the 2020-21 academic year, nine Stony Brook athletic programs posted a perfect NCAA APR score of 1,000. Every Stony Brook program scored over 960, which was well above the NCAA standard of 930. APR measures eligibility, graduation, and retention each semester of the academic term and provides a clear picture of academic performance for each team.

In 2020, Stony Brook opened its state-of-the-art indoor practice facility featuring an indoor multi-purpose synthetic turf practice field designed for multi-use, allowing all athletic programs to have a place to practice and train year-round.