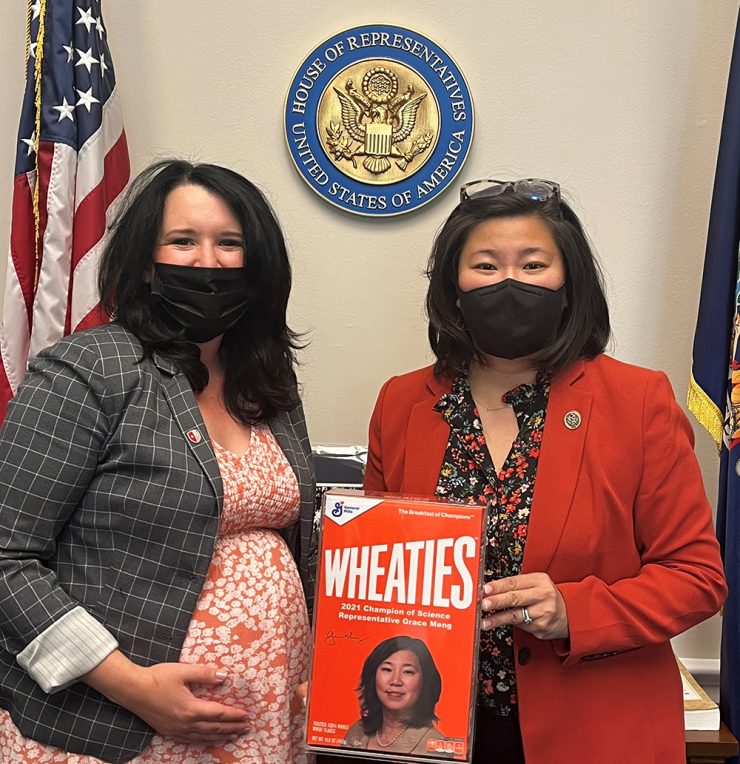 “I am honored to be named a Champion of Science by The Science Coalition,” said Representative Meng. “Federal investment for the fundamental research conducted at our colleges and universities is essential to creating jobs, fueling American innovation and discovery, and positioning the United States as the global research leader. From advocating for funding for the National Science Foundation to NASA’s Office of STEM Engagement, I remain committed to strengthening the partnerships between universities and federal research agencies to propel American science forward and support the next-generation research workforce.”

During the award presentation on Capitol Hill postponed from 2020, Stony Brook’s Assistant Vice President for Federal Relations and former TSC President Lauren Brookmeyer presented the award to the congresswoman. “Congresswoman Grace Meng is a tireless advocate for America’s scientific enterprise and for robust, predictable federal investments in fundamental science research,” said Brookmeyer. “Her leadership and unwavering support of funding for New York’s research universities and our nation’s key federal research agencies advances our nation’s ability to stay competitive globally and drives the next generation of life-changing discoveries. We are very fortunate to have Congresswoman Meng in our corner.”

Congresswoman Meng was nominated for the national award by Stony Brook University, New York University and Pace University, all members of TSC. TSC is a nonprofit, nonpartisan organization of more than 50 of the nation’s leading public and private research institutions. The Champion of Science award recognizes members of Congress whose actions and votes consistently reflect their commitment to federally funded fundamental research.