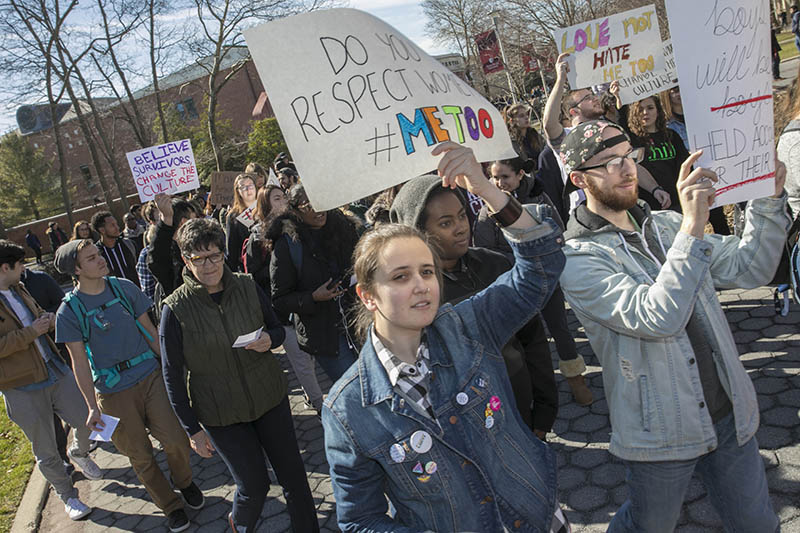 An estimated 225 members of the Stony Brook University community marched outside of the Student Activities Center on Wednesday, Feb. 28 in support of the national #MeToo movement and raised their voices in solidarity with the cause of ending sexual harassment.

The campus gathering, organized by the local Feminist Majority Leadership Alliance (FMLA), was designed as an opportunity for the community to show it stands strong on the issue of gender-based violence. The University showed support, with several administrators walking joining the marchers as they made their way around campus, shouting from bullhorns and holding placards.

“It’s 2018, it’s time for equality and for women to have a voice,” said Maisha Khan ‘19, a bio-chem major in the College of Arts and Sciences. “We can maximize various opportunities to keep building awareness and education on sexual harassment by continuously marching and posting on our social media pages.”

According to the National Sexual Violence Resource Center, which develops and disseminates resources on sexual violence prevention and intervention, 1 in 5 women and 1 in 16 men are sexually assaulted while in college, but only 10 percent of sexual assault victims on college campuses report the incidents.

For Mahum Siddiqui, president of FMLA, now is the time to stand up in unity. “Enough is enough. Sexual violence ends now,” said Mahum. “It’s time to speak up and speak now. Counselors at Stony Brook University are here to help anyone who feels victimized. Diversity is a critical component of the culture at Stony Brook University, one of a select groups of HeforShe campus’ devoted to gender equality and ending discrimination of any kind,” she said.

Stony Brook’s Center for Prevention and Outreach (CPO), located at the Student Activities Center, offers students services and support to address concerns about sexual violence. The Title IX website and Office of Institutional Diversity and Equity offer guidance for reporting sexual violence and also gives instructions on filing a Title IX complaint. Title IX is a federal law that prohibits discrimination on the basis of sex in any federally funded education program and provides individuals protection against sexual misconduct.

The #MeToo movement rapidly gained national attention over the past year following the numerous allegations against film producer Harvey Weinstein as people began to share their stories of sexual harassment using the hashtag #MeToo. This movement has allowed many survivors to break their silence and make their experiences public and the conversation has taken on a life of its own.

Stony Brook has also shown its commitment to women’s rights and support of survivors through hosting various events, such as the Green Dot trainings, Take Back the Night events, the Take a Stand, Walk with Me march, It’s On Us and various HeForShe campaign events and initiatives.

“The #MeToo movement means equality and empowerment for women,” said Abigail Houck, ‘18, a psychology major in the College of Arts and Sciences. “The indecencies that women have been exposed to all these years have finally gained a voice, and I am happy take a stand,” she said.