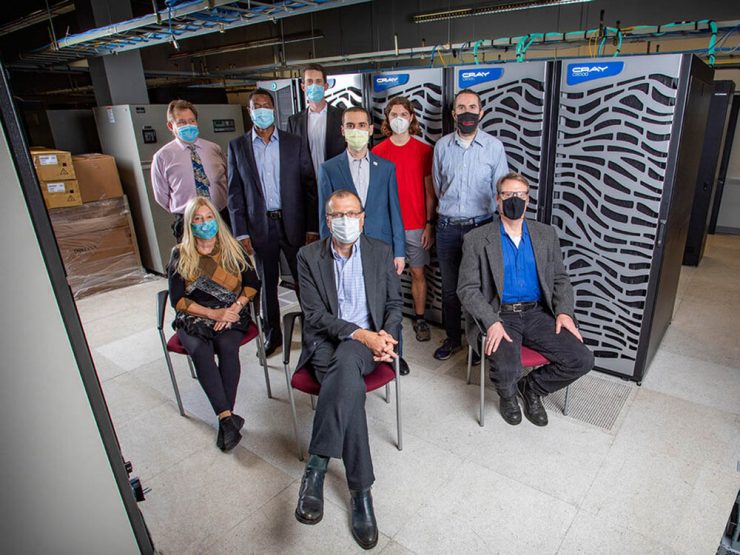 A computer system employing the same technology as the fastest and most power-efficient supercomputer in the world has been installed by Stony Brook’s Institute for Advanced Computational Science (IACS). The machine uses the same lightning-fast processor technology as the Fugaku system at the RIKEN Center for Computational Science in Japan. Named Ookami (wolf in Japanese), the computer is run by IACS in partnership with the Center for Computational Research at the University at Buffalo.

Ookami is one of the first computers outside of Japan to be powered by the HPE Apollo 80 system, which was originally developed by Cray and Fujitsu, and uses the Fujitsu A64FX processor.

The ARM-based processor includes multiple innovations integrated with very fast, low-latency memory that together make it easier for science and engineering applications to reach both high-performance and high-power efficiency, therefore “greener” technology.

“This system has a nearly magical combination of programmability, performance and efficiency, with the potential to transform computational research in many areas of science, engineering and industry,” said Robert Harrison, professor of Applied Mathematics and Statistics and director of the IACS. “Ookami is a resource for researchers in academia or industry nationwide. Its use opens the door for researchers to explore new computing technologies that could greatly impact the future of high-performance applications.”

“We are committed to expanding high-performance computing capabilities by developing flexible systems that can support new, diverse architectures such as with the HPE Apollo 80 using Fujitsu’s A64FX processor, purpose built for HPC,” said Bill Mannel, vice president and general manager, HPE. “We are honored to empower Stony Brook University’s mission to test new technologies that will accelerate a path of innovative HPC technologies, including a roadmap to exascale.”

Bright Cluster Manager software reduces the burden of building and managing high-performance Linux clusters, eliminating complexity and enabling flexibility. As a longtime user of Bright Cluster Manager, Stony Brook has been able to leverage the skills they have already invested to efficiently deploy and commission this new HPE platform.

“Bright Computing has a long history of working with Cray on state-of-the-art supercomputers, and we are delighted to continue this under their new HPE ownership. Our engineers have worked closely with Fujitsu’s A64FX-based development team to ensure Bright Cluster Manager seamlessly manages A64FX-based servers like HPE’s Apollo 80 in the same way we manage traditional intel-based servers. We are proud to play our part in bringing all these technologies together for our valued customer, Stony Brook,” said Lee Carter, VP Alliances at Bright.