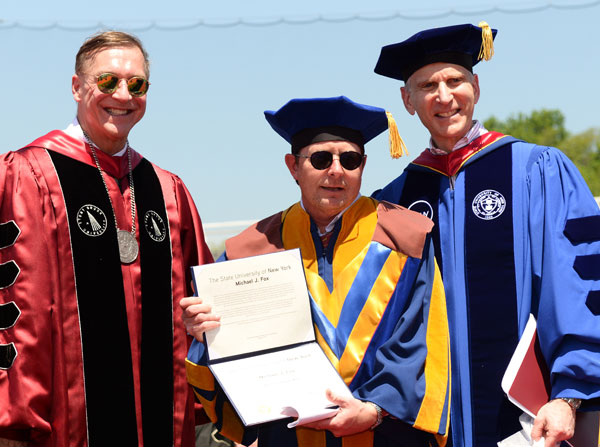 Emerging from Stony Brook with the momentum to make a difference, 6,991 students celebrated their graduation at the University’s 57th Commencement ceremony May 19 at Kenneth P. LaValle Stadium.

They became Stony Brook’s newest alumni, joining more than 160,000 of their forerunners around the globe whose lives and work advance the mission and spirit of Stony Brook.

“I don’t think anyone can say that graduating from Stony Brook is easy,” said President Samuel L. Stanley Jr., MD in his address to the Class of 2017. “You have met that challenge and you and your families should be proud of what you accomplished.”

“We will continue to push for excellence, and continue to make your Stony Brook degree and your University something you can always be proud of,” Stanley said.

In keeping with President Stanley’s remarks on excellence and achievement, two prominent leaders in their respective fields accepted honorary degrees.

Actor and philanthropist Michael J. Fox received the honorary degree of Doctor of Fine Arts, recognizing a career that has brought international acclaim with many honors and awards, as well as a dedication to charitable endeavor best exemplified by the founding and stewardship of the Michael J. Fox Foundation for Parkinson’s Research.

“Every single one of you has the power within you to impact the world, if you choose to act,” Fox told the Class of 2017.

“You represent a world of endless possibilities,” he said. “Among you may be the first human to walk on Mars, the engineer who will revolutionize the world’s energy technology, the next great investigative journalist who exposes corruption, or the groundbreaking scientist who discovers the cure for Parkinson’s.”

At one point Fox drew laughter from the crowd by glancing at his wristwatch, wryly evoking his iconic role in the hit Back to the Future films.

“You have faced your challenges with optimism and humor, and through your courage, you have inspired a generation to do its part to make a difference,” Stanley said.

Receiving a Doctor of Science for his contributions to the tech industry was programmer, photographer, serial entrepreneur, Stony Brook University alumnus, and founder and CEO of Shutterstock, Jonathan Oringer ‘96. His contributions include the invention of one of the web’s first pop-up blockers and the creation of Shutterstock, the global technology company that disrupted the image licensing industry.

In his remarks, Oringer recalled lessons learned from his Stony Brook education and laid special emphasis on the need to embrace diversity.

“The most successful countries will be the ones that have immigration policies that attract, retain and truly embrace the smartest people on the planet, while at the same time serving those people most in need, wherever they may come from,” Oringer said.

“Stony Brook is, and always has been, very diverse and welcoming – and I know it’s one of the values that the university strives for,” he added.

“You are a stellar example of how a Stony Brook education can take our students far beyond the expected,” Stanley said.

A third luminary, Prince Emmanuel de Merode, was to have accepted an honorary Doctor of Humane Letters but was unable to attend. President Stanley said he hopes the degree will be conferred at a future ceremony.

The nearly 7000 students graduating this year included 4,292 receiving bachelor’s degrees along with 1,999 master’s, 449 doctorates, and 129 MDs. 42 states and 71 countries were represented among the graduates.

“Whatever it is that the future has in store for us, no matter where we end up; whether it’s finding a job, landing an internship, or figuring out how to tackle our student loans, there is one thing that I’m absolutely sure of: We’re ready,” Jean said.

“We’re ready because we know that our degree isn’t just proving to others that we’ve mastered a lot of content; our degree is proving to us that we have all of the tools that we need to face and overcome the next set of challenges,” she said.

Also addressing the graduates was Senator Chuck Schumer (D-NY), who spoke of an era of profound economic and social changes and urged young people to embrace opportunities and overcome future challenges.

Delivering the national anthem and Stony Brook’s alma mater was soprano Ju Hyeon Han, a graduate student in the School of Music who recently became the first blind singer to be cast in a leading role in an American conservatory or university opera production.