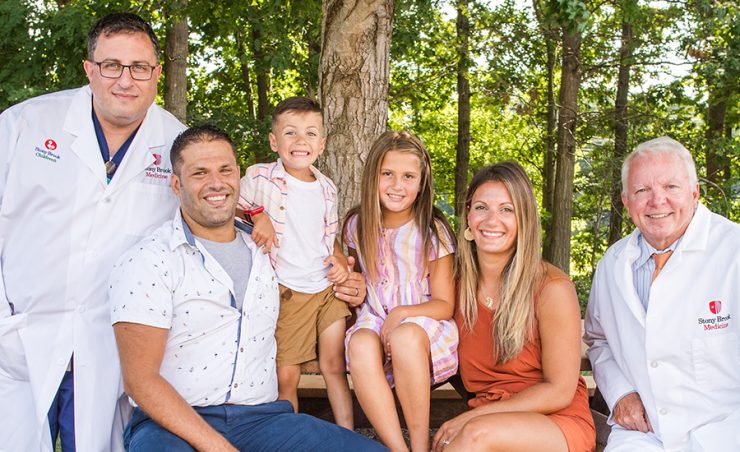 Four-year-old Charlie DeFraia of East Moriches started kindergarten on Sept. 7 and celebrated his fifth birthday the following week, thanks to the work of Stony Brook Medicine doctors and a response team that saved his life after a freak accident involving a metal straw.

Charlie was sipping a yogurt drink on June 20 on his family’s porch, using a metal straw, when he lost his balance and fell. The fall forced the straw through his tongue and throat, where it pierced the right carotid artery and jugular vein. His family, including mother Crystal DeFraia and father Charles DeFraia, an internal medicine doctor, responded by calling 911. Charles DeFraia worked to protect his son’s airway amid a frightening amount of blood loss.

Paramedics from Stony Brook Medicine EMS vehicle responded and declared a pediatric code T — the highest level of trauma activation — allowing police to shut down every road on the way to Stony Brook University Hospital. The ambulance arrived in 13 minutes, compared to 45 minutes in regular traffic.

The remarkable story has been reported by media outlets across the country and the world.

Read the complete story on how Stony Brook physicians and emergency personnel worked together to save Charlie’s life at the Stony Brook Neurosciences Institute website.

Charlie was in a medically induced coma for a week in the pediatric intensive care unit. He couldn’t move the left side of his body at first, but recovered more and more each day, and was discharged on July 7.

Charlie is now moving normally, except for a couple of fingers on his left hand that have some lingering weakness. Doctors said Charlie’s youth is definitely an advantage.

“Kids his age just have the most unbelievable ability to recover from this damage that (adults) just can’t,” Chesler said. “It’s unreal what they can sustain and recover from.”