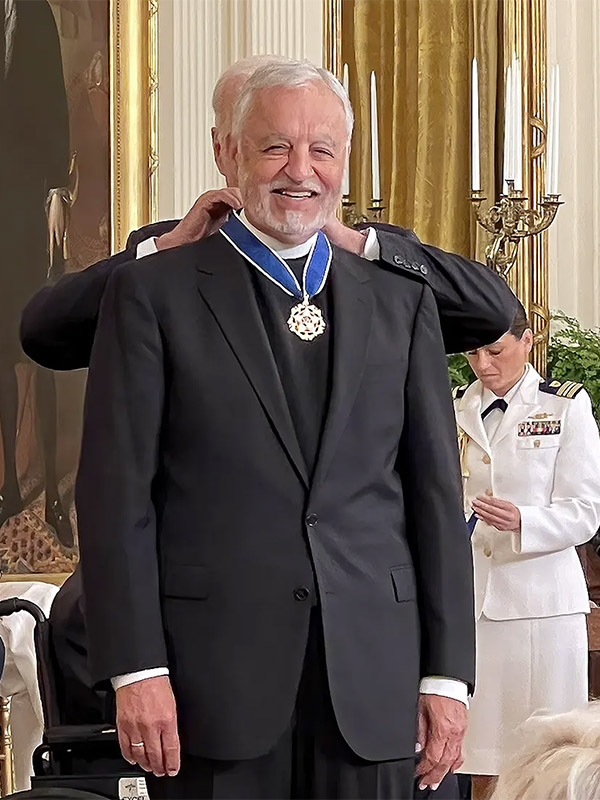 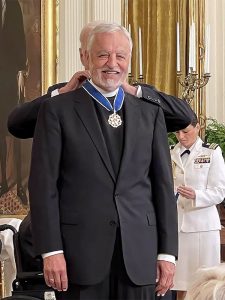 Father Alexander Karloutsos, a member of the Stony Brook Council, received the Presidential Medal of Freedom at the White House on July 7 for his work as a spiritual leader. The medal is the highest civilian honor in the U.S. and is awarded by the President to people who have aided or represented the country significantly in their lives.

Among the 17 recipients receiving the award this year were Simone Biles, Olympic medalist and the most decorated American gymnast in history; former U.S. representative and gun control activist Gabrielle Giffords; and actor Denzel Washington.

“Congratulations to Father Karloutsos, one of the most prominent religious figures in the United States. We are proud of our connection to him and his impressive work here at home in the faith community,” said Stony Brook University President Maurie McInnis. “Father Karloutsos is richly deserving of the Presidential Medal of Freedom as his mission with the church has a significant reach across Long Island, the state of New York, and beyond. He is a thoughtful member of the Stony Brook Council, an important oversight and advisory board, who cares deeply about our students and the opportunities the university provides to help them thrive.”

Father Karloutsos is the former vicar general of the Greek Orthodox Archdiocese of America and served more than 50 years as a priest. He is the assistant to Archbishop Demetrios of America, spiritual advisor to the Order of Saint Andrew Archons of the Ecumenical Patriarchate in America and to Faith: An Endowment for Orthodoxy & Hellenism. He serves as special assistant to the Archbishop working as liaison with heads of churches, the White House, Congress, state and local officials, Greek American organizations, political action, religious freedom and human rights groups. Karloutsos was involved in building the chapel at Camp David under President George H.W. Bush and helped raise millions in funding from the Greek community for the Saint Nicholas National Shrine at the World Trade Center in Manhattan.

He is also the pastor of Kimisis Tis Theotokou Greek Orthodox Church of the Hamptons and serves as the Orthodox chaplain for the Port Authority of New York and New Jersey. Father Karloutsos was previously executive director of Leadership 100, serving from 1986 to 1992 and 1999 to 2004, and was appointed by Archbishop Iakovos as the first vicar of public affairs of the Greek Orthodox Archdiocese of America in 1985, holding that position simultaneously until 1992 when he was appointed special assistant to His All Holiness Ecumenical Patriarch Bartholomew at the Ecumenical Patriarchate of Constantinople.