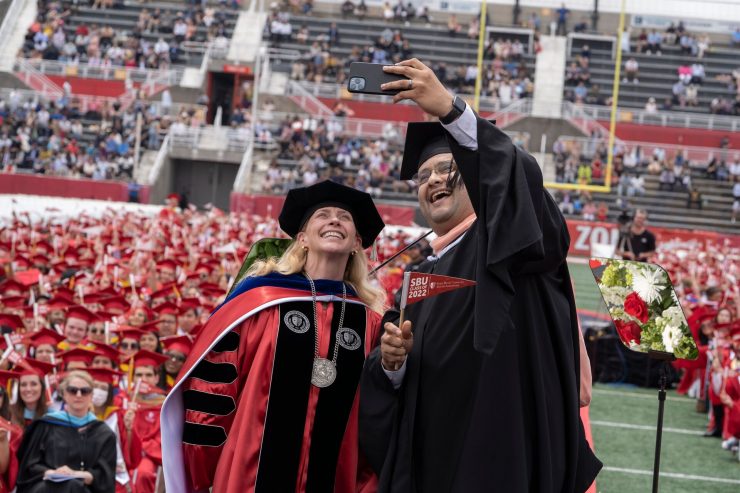 STONY BROOK, NY, May 20, 2022—More than 7,600 Stony Brook University students joined the ranks of the university’s accomplished alumni at the 2022 Degree Commencement Celebration ceremony. The ceremony took place at LaValle Stadium on Friday, May 20, 2022.

Students from one of the largest graduating classes in the University’s 65-year history were awarded a combined 7,610 degrees and certificate completions. All candidates, with their families and friends, were invited to participate in-person or watch via livestream.

“With the Class of 2022, it is very clear to me that your technique is to maintain a truly creative and collaborative spirit,” said Maurie McInnis, President, Stony Brook University. “I know you will move together, and as individuals, with a sense of discovery, ambition, innovation… and artistry. Stony Brook University is incredibly proud of all you have achieved here, and all you will go on to create.”

Award-winning independent film director Todd Haynes was awarded an honorary Doctor of Fine Arts degree at the 62nd commencement ceremony. Haynes, whose career in film and television spans four decades, created such projects as Poison, which won the Grand Jury Prize at the Sundance Film Festival. His other films include Safe, Velvet Goldmine, Far from Heaven, I’m Not There, Carol, Wonderstruck and Dark Waters. His work in television includes the miniseries Mildred Pierce and his most recent project is a documentary on the Velvet Underground which is now streaming on Apple TV. Haynes has collaborated often with Christine Vachon, founder of Stony Brook’s MFA in Film and guest lectured to students in the program.

Happily and with much fanfare, the Class of 2022 officially joined the ranks of more than 200,000 Seawolves worldwide. This class contains students from 68 countries and 45 states, and ranges in age from 19 to 71.

Degrees were bestowed in the following categories:

President McInnis spoke of the value of a Stony Brook University education, highlighting these students among those who excelled in the class of 2022:

The student speaker for the Class of  2022 was Ahmed Syed, a biology major, who spoke about his Stony Brook tradition: After his parents moved to the United States from India, his oldest brother earned his MD from Stony Brook and his other two brothers also graduated from the university. “Stony Brook wasn’t just a college our family went to, it’s been our legacy,” said Syed. “Understand that my parents came here with nothing and now, all four of their sons are college graduates. Not just four college graduates, but four Seawolves! This is nothing more than a testament to what Stony Brook stands for.”

As part of the ceremony, the President of the Undergraduate Student Government presented President McInnis with the Senior Class Legacy class gift check for $10,670.

Stony Brook University, a flagship of the State University of New York (SUNY) system, is going far beyond the expectations of today’s public universities. With nearly 27,000 students, 2,800 faculty members, more than 200,000 alumni, a premier academic medical center and 18 NCAA Division I athletic programs, Stony Brook is a research-intensive distinguished center of innovation dedicated to addressing the world’s biggest challenges. The university embraces its mission to provide comprehensive undergraduate, graduate and professional education of the highest quality, and has been ranked 23rd among top public universities by Forbes and 38th among public universities in the U.S. News & World Report Best Colleges listing. Fostering a commitment to academic research and intellectual endeavors, Stony Brook’s membership in the Association of American Universities (AAU) places it among the top 65 research institutions in North America. The university’s distinguished faculty have earned esteemed awards such as the Nobel Prize, Pulitzer Prize, Indianapolis Prize for animal conservation, Abel Prize and the inaugural Breakthrough Prize in Mathematics. Stony Brook has the responsibility of co-managing Brookhaven National Laboratory for the U.S. Department of Energy — one of only eight universities with a role in running a national laboratory. Providing economic growth for neighboring communities and the wider geographic region, the university totals an impressive $7.23 billion in increased economic output on Long Island. Follow us on Facebook (https://www.facebook.com/stonybrooku/) and Twitter (@stonybrooku).