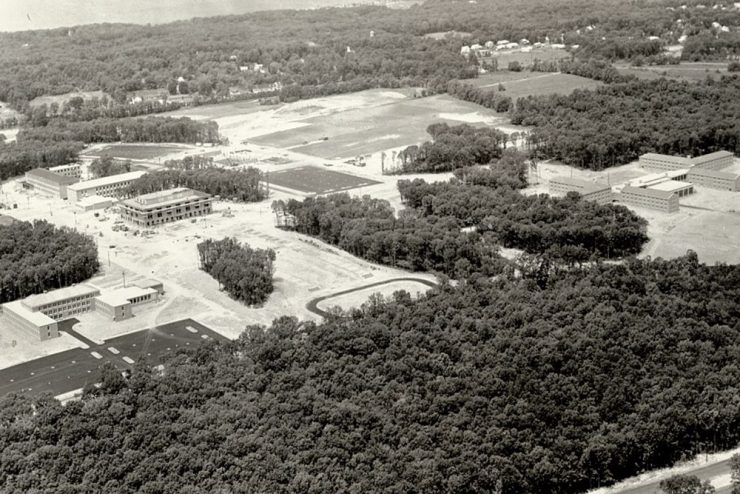 The lone residence hall on the leafy campus accommodated 600 students and housed administrative and faculty offices, the infirmary, a bookstore and — temporarily — the library. Classes were held in the Humanities building, the only other facility that had been completed at the time.

Nearly five years to the day earlier, 148 students became the first to attend classes at the new State University College on Long Island at Oyster Bay. New York was the last state to create a state-supported system, which finally happened in 1948 in the wake of a flood of GI Bill veterans seeking a college education amid evidence that private college admissions discriminated against minorities. As the Cold War stoked fears that the United States was falling behind technologically, better science education was seen as critical in maintaining America’s standing as a world leader and innovator.

To help address this, the State University College opened in 1957 on W.R. Coe’s former Planting Fields estate in Oyster Bay, and a search for a larger permanent campus began. At the time, the fledgling college’s administrators were tasked with the challenge to “prepare teachers of science and mathematics for secondary schools and community colleges.”

That home was found in Stony Brook, on 480 acres of land that Ward Melville, a businessman and philanthropist from the Three Village area in western Suffolk County, had transferred to the state in 1956 for the development of a state university. In 1962, the five-year-old State University College relocated to Stony Brook and was officially renamed as the State University of New York at Stony Brook.

In addition to the Humanities building and “G Dorm” — a corridor-style dormitory comprised of two wings connected by a cafeteria — the Chemistry building was also completed later in 1962. The next year would bring the Biology and Physics buildings and the library. Buildings for engineering and physical education were scheduled for Spring 1964, along with additional residence halls for 800 students. Residence halls for 1,000 more students were on tap for 1965.

“In September 1962, as a 17-year-old high school graduate, I came to the Stony Brook campus to begin my college experience, not knowing what to expect,” said Charlie Backfish, program director and director of field experience and clinical practice in the Department of History. “The usual campus tours for prospective students were not an option since the campus was basically a construction site. My campus world centered around all of my classes in the Humanities building while G Dorm was where I lived. The library was housed in the Humanities building while the campus bookstore and all of the administrative offices were in that dorm complex.”

After graduating in 1966, Backfish said he would occasionally return to attend concerts, and joined the staff of WUSB in 1978, hosting a program called Sunday Street that continues to this day. Following a career as a high school teacher, he returned to Stony Brook in 2000 as a faculty member, first as an adjunct then as a full-time faculty member working in the program for aspiring social studies teachers, which he now directs.

“The very first class I taught upon my return to Stony Brook was in the Humanities building,” said Backfish. “I had come full circle.”

For more on Stony Brook University history, visit the University Libraries website, including a timeline of events and milestones. 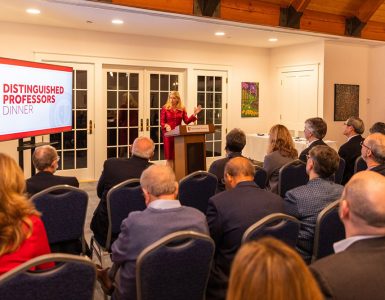