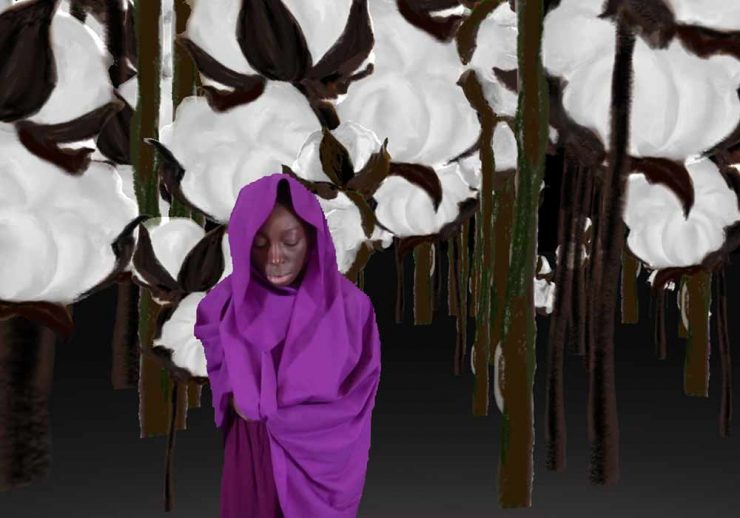 Secret Garden is an immersive web experience that highlights the power and resilience in Black women’s stories. In it, interactive audio vignettes tell a multi-generational narrative that incorporates past, present and future, inspired by Dinkins’ own autobiographical and ancestral experiences.

“Photography has always been my artistic background,” said Dinkins, an associate professor in the Department of Art. “Documenting my life and documenting the lives of others is where I started.”

As an artist, Dinkins said she doesn’t have what she calls “a coder’s brain,” though she’s been interested in technology since she was young. The puzzle to solve was how someone who doesn’t naturally have those technical proclivities can bring them into her world and leverage their enormous capabilities.

“It’s interesting that the creative mind and the technical mind are really just so opposite,” she said. “No matter which side you’re on, it’s intimidating to engage the other side.”

Dinkins said that it’s not necessarily the differences between the creative and technical minds that present the challenge — the challenge is in finding a common language.

“I need to be able to explain in a very particular way exactly what I want,” she said. “If they don’t get it, it’s on me to explain.”

Dinkins describes Secret Garden as an evolution of her previous work with Bina48, a humanoid robot featuring chatbot functionality, and N’TOO (Not The Only One), a multigenerational memoir of a Black American family told from the perspective of a unique deep-learning artificial intelligence.

“Secret Garden is really looking at the process of working with Not The Only One and a memoir based in AI,” she said. “When I was digging into my family history and then running it through an algorithm, I realized how important it is to tell the story in a way that holds its spirit and brings it forward.”

Communication and storytelling are at the core of Dinkins’ work.

“There’s a space in which Black women’s stories are not valued on the same level as other stories are or not heard in the same way,” said Dinkins.

She began the Secret Garden project years ago, and was intending to go to South by Southwest®, an annual gathering of interactive media, music festivals and conferences that takes place in mid-March in Austin, Texas. Then the COVID-19 pandemic hit, resulting in a six-month hiatus. During that time, the Sundance opportunity came up.

Creating Secret Garden was a very different experience as an artist.

“This was created with a team and was much more of a media project,” she described. “I was the lead artist, but we also had a lead technologist and other specialists. I had some trepidation and it was a very different experience, but in the end, we came together and created something that I’m really proud of.”

While 2020 was a difficult year for many, Dinkins said if there is a silver lining to be found, it’s that people found a way through a crisis and adapted, which is another central theme in much of her work.

“Figuring out a way to not only survive but to have space for joy and just being has been part of my world my whole life,” she said. “I think COVID made a lot of people experience that. My studio has been doing work that intersects Black Lives Matter and ideas of social isolation and social belonging all along. For me there’s just been a fluid ‘ongoingness.’ I’ve been like, ‘Welcome to my world.’ People are now seeing something that I’ve seen for a long time. Now we need to keep it moving.”

The theme of Black History Month at Stony Brook is Black creativity, something Dinkins said has shaped her whole life.

“Black creativity goes hand-in-hand with Black survival,” said Dinkins. “I think a lot about what that means in terms of my own self. What do we really want in our heart of hearts, what do we want to create? That bubbles up whether it’s black, white, green, whatever. And many times it bubbles up in ways that not only the person who made it can relate to, but others can relate to as well.”

Dinkins began her career in the corporate world working in the creative department of a major record label and then as a publicist at a Japanese publishing house and describes a growing feeling of “how plastic and how meaningless it all felt.” She said it was the 1992 Los Angeles riots that made her future path clearer.

“People were worried about getting books into the world when the world was literally burning,” she said. “I knew I needed to break away from that. I decided to put my energies into something more societally productive. I think we’re in another one of those moments now where a lot of people will come to a crossroads and find the thing that they need to be doing versus the thing to do to make money. I hope so. My aim is to impact society in some way, whether we call it art or not.”

Dinkins added that as a Black person in America, it’s important to find the power you hold and believe in it, even though the world is often telling you you’re powerless.

“We’re told we don’t have privilege and we buy it,” she said. “So the idea of being able to recognize one’s power regardless of what the world is saying and having the resilience to withstand what the world is telling you becomes really important to me. You have to get up every time you’ve been punched in the face and carry on. We’ve had to survive in this world for 200 years under those conditions.”

Dinkins said it’s amazing to be able to do what she does, coming from a family whose last generation worked in the same place for 40 years because they didn’t have the opportunity to do anything else.

“My aunt always says that she’s happy that I’m out doing what I want to do,” she said. “But if I’m really listening to that, I hear ‘I worked in the same factory for 40 years, and I’ve watched you out in the world, traveling all the time, going places, getting grants and awards.’ It must be unfathomable to her in many ways.”

Much of Dinkins’ current work is about helping future generations understand the struggle, their power and their resilience.

“I already see that the connection to what I got from my family is missing for the next generation, and I think it’s important to understand your trajectory and where you come from because that’s where that power of understanding lies,” she said. “I’m asking that people understand that they stand on each other’s stories, whether it’s past or future. That’s where your power comes from.”