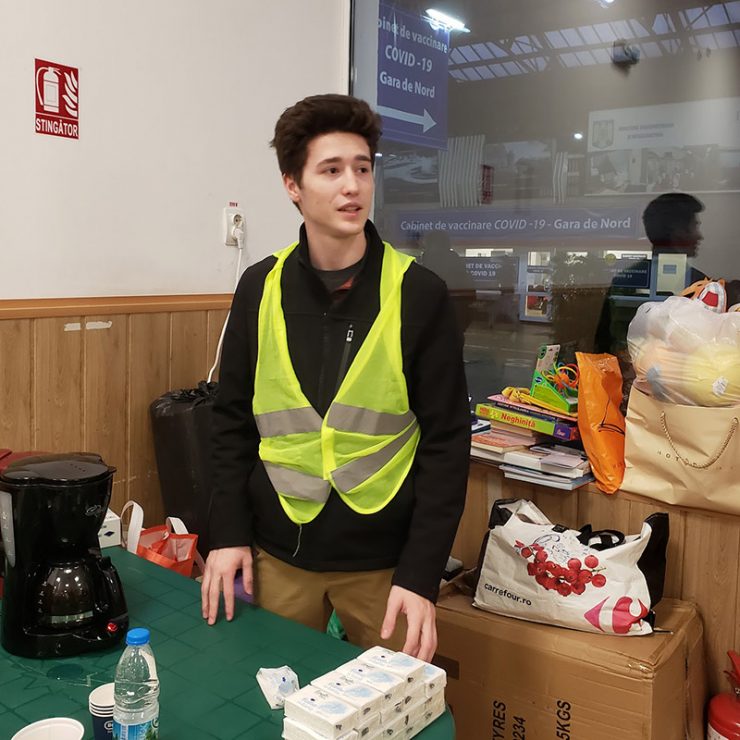 While some students spent their spring break on the beach decompressing from the pressures of the academic year, Stony Brook University sophomore Thomas Brinkley spent his helping Ukrainian refugees in Romania. And he wouldn’t have had it any other way.

Upon hearing of the Russian invasion of Ukraine in late February, Brinkley felt compelled to do something. He ended up organizing a campus fundraiser that raised more than $5,000, and then traveled to Bucharest, Romania, with three suitcases full of donations.

Brinkley got down to business immediately after his father, U.S. Army Lt. Col. Edwin Brinkley, who works at the U.S. Embassy in Bucharest, picked him up at the airport. He first stop was the city center to determine what supplies he could purchase and donate. Then it was off to the city’s train station, Gara de Nord, where a help center had been set up by the city government and the International Red Cross. The train station served as a safe haven for the refugees, many of whom had fled their home country with little more than the shirts on their backs.

“The first day I brought one of the suitcases and stayed at the train station sorting donations and helping people get to wherever they needed to go,” he said. “Two of the things they needed the most were luggage and groceries. There were some people who had only brought plastic bags of clothes and valuables, whatever they could manage to grab and carry on such short notice. Fortunately, I was able to get them what they needed.”

Brinkley, a biology major in the College of Arts and Sciences, estimates that at least 100 volunteers were on site on any given day. He’d spend six to seven hours a day among them sorting donations, engaging with the refugees or shopping for more supplies.

“The volunteers were primarily local Romanians, but there were others there as well,” he said. “I worked with an exchange student from London and two students that were from Italy. I knew going into it that it was going to be a surreal experience, and it was. I’m thankful to have had the opportunity to help. I was not expecting as big of an effort as what I had seen.”

Since most of the volunteers and refugees didn’t speak English, Brinkley took his best shot at speaking multiple languages, including Ukrainian, Russian, Bosnian and German.

“I lived in Eastern Europe for four years,” he said. “All the languages I learned came flooding back. I haven’t spoken Bosnian or German in years, but I was able to pick them back up the more time I spent in the train station.”

Brinkley describes the experience as both rewarding and humbling.

“It’s one thing to see it happen on the news, but it’s a completely different experience when you’re physically there,” he said. “I’ve definitely gained an appreciation for how I was raised and the privileges that I’ve had growing up.”

Back at Stony Brook, Brinkley says he has to focus on his biology studies, but that this won’t be the last time he lends a hand.